In this dystopian novel, love is a sickness and it’s illegal. The book is narrated by Lena Haloway, an 18-year-old who is afraid of everything. Her mother committed suicide, another illegal act and now her family’s name is tarnished. Her older sister is married and perfectly happy. Her best friend, Hannah, is a rebellious teen who has no fears, she listens to illegal music and kisses boys who are not her “matches.” Lena feels like she does not fit in with Hannah and cannot wait for her interview.
Upon turning 18, residents have an interview with a board of officials to see what their career will be, how much education they will have, who they will marry, how many children they may have and they get the cure for delirium, or love. Lena has been looking forward to this day ever since her mother died.
Throughout the book she flashes back to moments with her mother and sister, like when they would blast music and dance around the house all day. These things were also illegal, but the thing she remembers most about her mother was that she was in love with her father. Lena has avoided anything illegal because of her mother’s suicide.
Halfway through the interview Lena’s real thoughts, not her aunt’s drilled in thoughts, come through. Her favorite color was supposed to be a calm color that does not attract attention, but instead Lena tells the board that her favorite color is the color of mist. Shortly after, a herd of cows run through the room, causing chaos and Lena enjoys it.
Like every dystopian novel, there are rebellious teens and a rebel faction. The teens throw parties in abandoned houses, they play illegal music, drink and do drugs. Hannah invites Lena to one of the parties, but Lena refuses because she is still afraid of getting in trouble. That same night there is a raid and Lena goes to the party to save Hannah. At this party is a boy named Alex. Lena met Alex before and found something alluring about him. He knows a lot about the rebellious group that lives in a place called the Wilds. He saves her and makes Lena feel differently than she has ever felt.
This book has everything you can ask from a young adult dystopian novel. There is a rebellious group, a Romeo-Juliet love story and a ton of drama. If you are in the need of a great drama with a twist, this is the book for you. There were a few bothersome aspects about this book though. Lena’s progression as a character was too fast and if you read the next two books in the series you will see what I mean. Also, Alex has stalker qualities.
All of the characters are very well written and realistic. This book/series gets a 9 out of 10. If you finish the series the author has some great short stories about secondary characters. 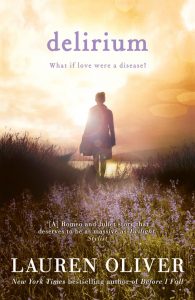