Most say, “you either like her or you hate her.” Regardless of her likability, Joan Rivers has been known to most of the world as a comedic queen; an internationally known comedienne, Emmy award-winning television talk-show host, Tony award-nominated actress and red carpet fashion laureate, she made great strides in the pop-culture community. Her blunt humor and spunky ‘tude followed her wherever she traveled; she was marveled as an unbelievable presence, and an unforgettably good time.
Rivers passed away on September 4 at Mount Sinai Hospital after experiencing serious complications during throat surgery. Her death at the age of 81 shocked most of the world, as comedienne Sarah Silverman stated upon hearing of her death, “She wasn’t done yet.”
Rivers was a revolutionary in the comedic field, she has often been said to have “broken the glass ceiling of Late Night Television.” She was chosen to be the only permanent guest host on “The Tonight Show” for three years, and following this 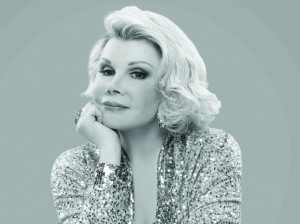 became the first woman ever to host her own late night talk-show, “The Late Show Starring Joan Rivers.” She was also known for her snarky and unforgivingly blunt stand up comedy, warranting laughs that birthed her reputation. Up until her untimely death, she was still heavily involved in the comedic and pop-culture scene, most known by her appearance on the celebrity fashion show, “Fashion Police,” and her reality show, “Joan & Melissa: Joan Knows Best?” Rivers authored twelve best-selling memoir and humor related books.
Also largely known for her harsh comedic wit, some of Rivers’ most prized quotes were not only aimed at other celebrities, but were also self depricating, never failing to give one a belly full of laughs. A few crowd favorites include, “My love life is like a piece of swiss cheese, most of it is missing, and what’s there stinks,” or “it’s been so long since I’ve made love, I can’t remember who gets tied up.” Her words on her wishes for her own funeral have been surfing the web since her death, including a phrase which mentions having better hair than Beyoncé in the casket and a particularly snarky quip, “at my funeral I want Meryl Streep crying in five different accents.”
A majority of celebrity deaths arrive with pretense: a past of drug abuse, alcoholism, struggles with depression, or prolonged illness. Rivers’ death was a shock to the world, and an even greater hit to the comedic realm. With the loss of comedy legend Robin Williams just weeks ago, the world has truly gotten a lot less funny. Yet, that which Rivers and Williams did for the comedy world remains and will leave a large impact for those to follow.