The 75th Golden Globe Award ceremony took place on January 7, 2018. It was an eventful night, with boos given to Harvey Weinstein, an unforgettable speech from Oprah Winfrey, and talented actors and actresses receiving awards for their work. Sterling K. Brown was the first black actor to win the Best Dramatic Actor award for his work on This Is Us, a new popualar television series.

Aside from the actual presentation of awards, a prominent topic of discussion was the “Me Too” movement, which showcased the sudden influx of statements from sexual harassment and assult survivors. This movement highlighted the dialogue of sexual harassment and treatment of women, specifically in Hollywood.

A legal fund was created in response to “Me Too” called “Times Up,” which signified the end of an era in Hollywood; one in which both men and women stayed silent and passive in the face of the degradation and unequal treatment of women in the workplace.

At the ceremony we saw many celebrities wearing black in support of the movement. Some of these celebrities include Saoirse Ronan, Tracee Ellis Ross, Salma Hayek, Viola Davis, Sterling K. Brown, Meryl Streep, and Emma Watson. 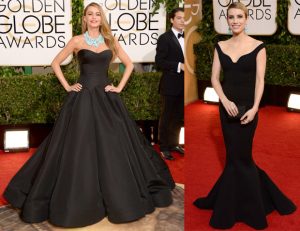 This is not the first time that fashion has been used to demonstrate awareness of a social or political motion. Politics have appeared in the clothing and accessories of activists for years, and it has been incorporated in a way that is trendy but also holds a lasting impact.

At pride events, members of the LGBTQA+ community as well as allies wear rainbow to signify their association with the fight for rights and equality. Similarly, at the women’s marches that have taken place in recent months, people wear pink hats to show their support. 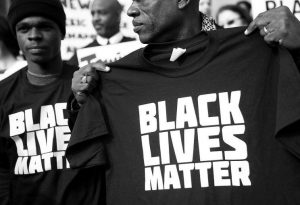 Phrases from social justice issues have also been used in fashion, “Black Lives Matter” has been placed on hats, shirts, hoodies, and other forms of merchandise. These examples are all used as effective tools in spreading awareness about the issues while also keeping them relevant and the dialogue alive.

At the Golden Globe Awards, however, not everyone thought so. Rose McGowan, who has accused Harvey Weinstein of rape, called the protest an “empty gesture.” Many may agree that fashion’s role in social issues alone is ineffective and frivolous, and that people should take active steps in putting an end to social issues.

Is wearing black only succeeding in highlighting audiences who are already in support of the movement? Is it just a way for celebrities to showcase that they are good people, or are they using their platforms and privilege to spread awareness about a subject and unite as a whole to dismantle the warped system? Maybe we won’t ever know for sure, but the fact remains that the use of fashion to make a statement about social reform never hurts.