Coming off of a franchise-worst 17-win season, the New York Knicks were blessed with some good fortune, drafting Kristaps Porzingis with the 4th pick in the 2015 NBA Draft. Although many Knicks fans were dazzled at the immediate impact that Porzingis had, there’s still a dark aura that hovers over the future of this franchise. There are several questions that need to be answered this offseason to provide a clear cut path for this disembodied franchise that hasn’t won a title since 1973.

After President of Basketball Operation Phil Jackson unceremoniously fired Derek Fisher, the interim tag was placed on Kurt Rambis, another Jackson disciple. While Rambis’ tenure could be seen as a trial period, Rambis has made it clear that he wishes to return next season as the full time coach. There are of course other options out there, such as Tom Thibodeau, Luke Walton, and David Blatt, but who is the realistic option? Jackson has made it clear he wants the triangle offense to be run. Aside from Rambis, will any of these potential coaching candidates comply with Jackson’s demands?

Is James Dolan the hero that New York needs?

For Knicks fans, calling team owner James Dolan a hero is probably one of the most irrational statements they can make; yet here we are. After being swindled in the Carmelo Anthony deal, along with several other awful decisions, it may be up to Dolan to limit the damage that Jackson might potentially make. The triangle offense is outdated. Jackson making Rambis the full time coach could prolong the ineptitude of this Knicks team. Don’t you think Fisher trying to shy away from the triangle has something to do with his firing? Dolan has the authority to overrule any coaching decision that Jackson may make and it may be necessary for him to step in.

Can the Knicks improve enough to compete and keep Carmelo Anthony happy?

It’s no secret that Anthony is displeased with the losing this franchise has gone through in recent years. It’s become so bad that some people in the Knicks organization believe that Anthony would be willing to waive his no-trade clause if the franchise doesn’t make enough moves in free agency, although Anthony has adamantly expressed his desire to go through the process. The Knicks will have at least $18-million to spend this offseason on free agents. Can they attract someone who will catapult the Knicks in the standings? Or will Anthony finally call it quits in New York?

Will New York finally address the need for a guard this offseason?

You don’t need advanced statistics to show you that the guard play in New York has been less than stellar. In a guard-driven league, Jose Calderon and Sasha Vujačić, two below average athletes, just could not keep up with opposing guards this season. While they could be serviceable options off the bench, the Knicks need to make immediate improvements to both the one and two if they want to compete. The obvious targets include DeMar DeRozan, Mike Conley, and Rajon Rondo. 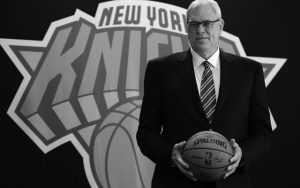