Since 1880, the midst of the Industrial Revolution, global temperatures have increased by .85 degrees Celsius. You may not find this very compelling. However, this seemingly small escalation is responsible for the worldwide changes that everyone is witnessing.

This occurrence, for many, has been easy to ignore given no tangible consequence was in the near future. On the contrary, even if everyone immediately, drastically changed their behavior, Earth’s temperatures would still increase at least two degrees Celsius in just a few decades. This change could even be as high as six degrees.

So what; Hollister will have a spike in shorts sales?

Every factor of the Earth’s condition is complexly interconnected so that it may function properly; rainfall, soil content, hours of sunlight, the behavior of every living thing— and, yes, temperature— all work together in a cause-and-effect relationship.

Since 1900, at least 50 species have gone extinct. The golden frog, for example, was last seen in 1989. Scientists believe that this extinction occurred because their habitats, mountaintop cloud forests, have disappeared due to drought and other climatic changes. If Earth’s climate changed four degrees Celsius, two-thirds of plant species and one-third of mammal species could lose their habitats. The planet’s biodiversity would be severely damaged.

Up to 263-million people would be exposed to coastal and river flooding; numerous homes would be submerged. Almost two billion people would live in areas without usable water. Food and water borne diseases would spread more rapidly. Crop production would be at high risk and fish would be harder to catch, thereby increasing the price of food. This change will occur so quickly that terrestrial and freshwater species would not have time to relocate.

According to a report by Cornell University, The University of Arizona, and the US Geological Survey, droughts could last as long as ten years. Even now, California is the driest it’s been in over 500 years as it is in the middle of a four-year drought.

Already, animals are migrating sooner. Coral reefs have already begun bleaching and dying off. Bark beetles have been flourishing in the warmer temperatures, resulting in their killing of trees.

As temperatures rise, allergenic weeds would thrive. Mount Kilimanjaro would melt away. 20 more hurricanes and tropical storms would hit each year by the 22nd century, according to a 2013 study published in the Proceedings of the National Academy of Sciences. Additionally, high temperatures are believed to increase forest fires.

China, India, and the United States have some of the highest carbon emissions; those greenhouse gases contribute to global warming. To start making a change, these countries would have to stop using fossil fuels, create renewable technologies, and spend trillions of dollars helping developing nations follow suit. India currently plans to build over 440 coal power plants in the next 15 years. 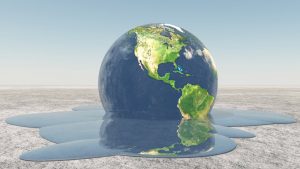 Climate change is not only an issue of survival, but it is highly politicized. The way that voters prioritize their concerns for global warming will influence their views on the presidential candidates. Depending on each candidate’s urgency (or lack thereof) to tackle the issue of climate change will subsequently affect everyone’s vote in the upcoming election.