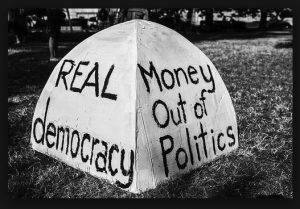 Why have most Americans, and especially young people, given up on democracy? Did you know that less than 37 percent of Americans voted in the last election? And even a smaller percentage of young people ( 21 percent) did so?

Maybe it has to do with the fact that we are fed up with a political system dominated by big money and mega-donors, many of whom are part of the country’s richest one percent. According to the Center for Responsive Politics, candidates are expected to spend almost $8 billion in 2016. Most of the money influencing our elections comes from a small group of mega-donors! These wealthy individuals “invest” in elections so that they can influence the government’s laws and policies.

Students want to have a voice in the future, but we can’t compete with the money that floods into campaigns and advertising. So what can we do? If the problem is that big money has hijacked our democracy, the solution is to find a different way to fund campaigns. Surprisingly, some states and cities – including New York City for the last 25 years–have already done that. They have created small donor/public campaign financing laws that allow ordinary citizens to run for office without being rich themselves or dependent on big donors. It works by allowing regular citizens, not just the rich, to run for office and win.

What can we do? We need to elect representatives who listen to us…not to their big funders. We need a way to enable young people, middle income people and regular New Yorkers to run for office without depending on huge donations from banking, oil and gas, pharmaceutical and corporate special interests.  We need to stop big campaign contributors from buying our democracy!

Democracy is precious and worth fighting for. We need to create a government that is really of, by and for the people of this country. Young people have been part of important changes in the past. Now they can again lead the way to a future in which all our voices are heard.

With fair elections, you or I could run for office with public financing and make sure that the needs of young people are represented in Albany. We can have a voice, but first we need to join the thousands of New Yorkers who are telling our representatives that they need to represent us, not their big campaign donors. You can make a difference by being part of this historic cause. Help create a government that is truly of, by and for the American people.