Valarie and her boyfriend Nick are outcasts. The two hate half of the school, especially a girl named Jessica, and together they make a hate list.
One day, Valarie comes to school and finds Nick acting strangely excited. That day he brings a gun to school and kills some of the people on the hate list. Valarie is shot while saving Jessica and then watches Nick shoot himself. Five months later Valerie returns to school and is forced to deal with the aftermath. Everyone believes she was involved and helped Nick, so when she goes back she is shunned by everyone. People who had friends killed or injured in the shooting are terrified of Valarie.
In this novel the reader experiences the aftermath with Valarie, forced to relive flashes back to her and Nick’s relationship, experiencing his kindness as it turns into the evil that shot up their high school.
While this topic is very touchy, Brown does a great job explaining the outcome of an experience like this and how people close to the shooter have to deal with their choices.
Valarie loses her friends from before the shooting, while gaining some unexpected new ones. She becomes close to people she hated before while becoming a better version of herself. She helps with a memorial for the people who were killed in the shooting and does what she can for those around her. When a girl tries to commit suicide, Valarie realizes that others are dealing with Nick’s actions and she is not alone. This realization gives her the motivation to make the best of what she is given.
Valarie’s therapist and art teacher help her get through the changes in her life after such a mortifying event. They also help her cope with her father’s affair, her mother waiting for Valerie to snap and her brother who blames everything on her. She has a hard time trusting both of them, but when she does her attitude changes for the better.
The topic of the book can put some people off and hit nerves, but it is a great book and opens the reader’s eyes to what these characters go through. It does not justify Nick’s actions or say that people should feel bad for those who do things like this. Brown shows the struggle Valarie has with this. This is a hard realization for Valarie to come to but once she does, her life turns around. She goes from the shooter’s shunned girlfriend to the person who helps the victims, even as a victim herself.
If this book is given a chance, whoever reads it will not regret it. The way it is written is as if the reader is there with Valarie and roots for her to come out of this situation shining. This book is a 9 out of 10. 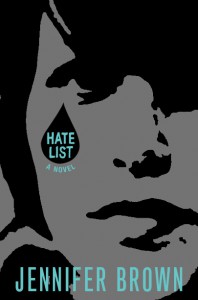