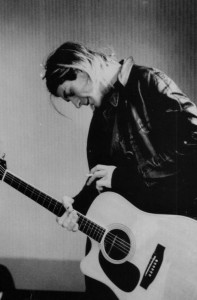 ed the date of the passing of two front men of the grunge scene: Kurt Cobain of Nirvana and Layne Staley of Alice in Chains. These two vocalists for their respective bands made a tremendous impact in the music scene during the 1990s. Nirvana and Alice in Chains are two of the most renowned bands in the grunge scene and are arguably responsible for the growth of the grunge movement. Both bands continue to stand as relevant across musical genres and, specifically, within the newer punk rock scene, based primarily out of the Pennsylvania area.
While today’s punk scene is becoming centralized in the Pennsylvania area, grunge was prominent in Seattle, Washington. Both Nirvana and Alice in Chains were formed in Seattle, where the scene had the strongest following. Hence, these bands are some that helped contribute to the nickname for the genre, “the Seattle sound.” Success of both of these groups was rampant; it was difficult for either outfit to escape mainstream popularity.
As a genre, grunge was not defined prior to the existence of bands such as the two aforementioned acts. Originally, bands of this variety, similar to many other bands, just wanted to play music. Their sound was something that came with experience, practice and dedication. None of these bands set out to be a particular type of band, nor did they desire to be bands that put on a show aside from the music they played.
What is vital to note about both Staley and Cobain is their dislike of the fame associated with the business they found themselves in. In a sense, this genre took the punk rock ideal of “playing a show simply for the music and disregarding what anyone has to say or do about” and lived it. However, Staley and Cobain may have felt that this conviction did not exactly sit well as they gained mainstream popularity. Distinguished critic of the genre, Dave Rimmer, makes an excellent point that certainly could have contributed to Staley and Cobain’s repulsion toward their unintended fame: “Can you be pure enough, day after day, year after year, to prove your authenticity, to live up to the music… And if you can’t, can you live with being a poser, a phony, a sellout?”
Commonalities between both lead vocalists are numerous: both suffered from depression, drug addiction and a complete resentment for the spotlight they found themselves in. However, where they differ is the means of death. Staley passed away from a drug overdose, whereas Cobain from a self-inflicted wound.
Regardless of where you stand on the grunge movement, genre or the bands involved, Staley and especially Cobain remain relevant as leaders of a movement.