It’s been 20 years since Chris Mullin last suited up for the St John’s Red Storm, but now, Mullin is tasked with leading the team in a different way. St. John’s University announced on Tuesday, March 31, that Mullin will be the next head coach of the St. John’s Men’s Basketball team.

The Brooklyn-born native is making the return back to his alma mater, a place where he was extremely successful. Arguably the best player in St. John’s history, Mullin was named Big East Player of the Year on three separate occasions, the only player to do so.

Mullin was also a three-time Haggerty Award winner (given to the best college player in NYC) and a Wooden Award winner (Most Outstanding Player). Mullin would go on to get drafted seventh overall in the 1985 NBA Draft by the Golden State Warriors, playing 16 seasons in the NBA.

However, skeptics worry about the hiring of Mullin as head coach as he lacks any prior coaching experience.

Mullin said, “he would rely on his years as an NBA executive with the Golden State Warriors and advisor with the Sacramento Kings to guide his understanding of the players he wants.”

The X’s and O’s are just one aspect in College Basketball, so how would Mullin fare in recruiting? In a Q&A with the New York Times, former Iowa State Assistant Coach Matt Abdelmassih put that argument to rest. Abdelmassih will now serve as an assistant under Mullin.

When asked about possible recruiting issues, Abdelmassih said, “All you have to do is bring up that Dream Team picture. I’m pretty sure it’ll resonate fast.”

Mullin was a member of the 1992 Olympic Men’s Basketball team, nicknamed “The Dream Team,” that featured a superstar roster that included Michael Jordan, Magic Johnson and Larry Bird. The Dream Team would go on to win the gold medal, winning each game by at least 30 points.

It’s obvious that St. John’s is relying on the reputation and glamour that resides in the Mullin name to help revive St John’s Basketball.

This season under previous Head Coach Steve Lavin, the Red Storm went 21-12 (10-8, Big East) before bowing out of the first round of the Big East Tournament and NCAA Tournament without much of a fight.

Already having recruited Abdelmassih, Mullin’s next move is to bring together a strong support system that his players and coaches will be able to lean on.

“Larry Bird and I spoke. Mark Jackson and I did speak, Steve Kerr too. First and foremost they all said it’s so important to have a strong staff, have it balanced the right way and have that support,” Mullin said.

Mullin already has personnel issues to deal with as Chris Obekpa and Rysheed Jordan are mulling their decisions whether to make the jump to the NBA or return for another year at St. John’s. 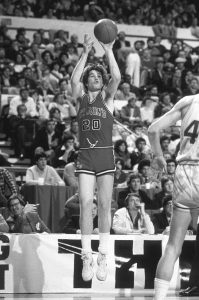