After four successful years at Santa Clara University, Nash was drafted fifteenth overall by the Phoenix Suns. He would go on to have stints with the Dallas Mavericks and the Los Angeles Lakers as well.

Dallas was where Nash started to make a name for himself that led to a Western Conference Finals appearance and superstardom.

A guaranteed future Hall of Famer, Nash embodied the point guard position, setting a new era in basketball offense under Phoenix Suns Head Coach Mike D’Antoni.
In his  article on the Player’s Tribune Nash spoke about the importance of his former coach.

“Mike D’Antoni changed the game of basketball. There’s not many people you can say that about. No wonder I had my best years playing for him. His intelligence guided him to never over-coach, complicate or hide behind the game’s traditions”

Nash set career-highs in points (18.8 PPG) and assists (11.6 APG) during his second stint in Phoenix, under D’Antoni.

There was one more Western Conference Finals appearance in Phoenix before Nash was shipped to the Los Angeles Lakers in a trade, forming a duo with Kobe Bryant and Dwight Howard.

But a non-displaced fracture in his left leg in his first season in Los Angeles sidelined Nash for 32 games. The leg injury caused Nash to suffer nerve problems as well, hindering his game appearances significantly.
Nash last played on April 8, 2014 in a 145-130 loss against the Houston Rockets.

“When I signed with the Lakers, I had big dreams of lifting the fans up and lighting this city on fire. I turned down more lucrative offers to come to L.A. because I wanted to be in the ‘fire,’ and play for high risk and high reward in my last NBA chapter. In my second game here, I broke my leg and nothing was the same.”

Although injuries derailed Nash’s final seasons in Los Angeles, he leaves behind a proud legacy in the NBA.

No one revolutionized the point guard position like Nash. It was his fast pace and quick thinking that opened up offenses around the league. His skill, vision and propensity to set up teammates, with a bit of flash, is what point guards today embody.

Nash attempted one final run the past two seasons in Los Angeles, but the recurring nerve damaged continued to affect Nash, ending both attempts.

“I will likely never play basketball again. It’s bittersweet. I already miss the game deeply but I’m really excited to learn to do something else.”

Although his inability to stay healthy took away his final seasons in Los Angeles, Nash’s career will always be remembered as iconic. 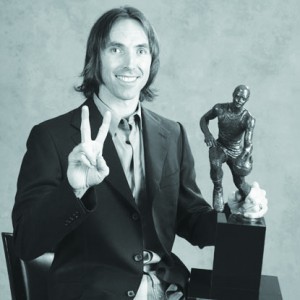