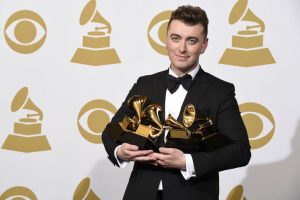 On Sunday, February 9, the Staples Center was packed with celebrities, musicians, athletes and fans eager to witness the 57th annual Grammy Awards. Music’s biggest night was loaded with performances from the past year’s top artists and there were plenty of surprises when it came to the award winners.
LL Cool J hosted the event for the fourth consecutive year. Although fans and critics alike often criticize the Grammy’s, they’re still the music industry’s most important event when all is said and done.
The night kicked off with legendary rock band AC/DC performing “Rock or Bust,” the title track off of their latest album, and the classic “Highway to Hell.” The Aussie rockers haven’t lost a step after all this time, and their energetic performance was a fitting way to start the show.
However, as the night unfolded most of the performances were all orchestrated in a somber tone, filled to the brim with ballads and songs of heartbreak.
Ariana Grande tugged at the audiences heartstrings with “Just a Little Bit of Your Heart,” Adam Levine and Gwen Stefani tag-teamed Maroon 5’s “My Heart is Open,” Sam Smith and Mary J. Blige collaborated on Smith’s hit “Stay With Me” (plenty on this later) and Common and John Legend closed the night with the powerful “Glory,” from the movie Selma.
Other knockout performances included Kanye West performing “Only One” under a single spotlight in remembrance of his late mother; Beyonce blowing the roof off the Staples Center with the gospel classic “Take My Hand, Precious Lord,” and Sia using stunning visuals and choreography for her hit “Chandelier.”
The most powerful and important performance however, goes to Katy Perry. Before she took the stage, a video was shown of President Obama addressing the domestic violence issue in America, followed by the most emotional moment of the night courtesy of Brooke Axtell.
Axtell is a domestic violence survivor who had to escape from an abusive husband. Her speech moved the entire audience and showed incredible courage by detailing her life’s darkest moment. Perry then performed “By the Grace of God” for all those affected by domestic violence. She also reminded us that she isn’t just famous because of her image or a halftime show, but because of her voice.
It is unfortunate that the Grammy’s sent this anti-domestic violence message while simultaneously nominating Chris Brown and R. Kelly for awards.
The awards portion of the show included some surprises and total domination by one breakthrough artist of the past year, British crooner Sam Smith. Smith cleaned up shop at the Grammy’s by taking home the awards for Best New Artist, Best Pop Vocal Album (In the Lonely Hour), Song of the Year (“Stay With Me”), and Record of the Year (“Stay With Me”).
Smith triumphed over Taylor Swift in multiple categories, which was surprising considering Swift was the only artist to have a platinum album in 2014.
The real surprise came when Beck won Album of the Year for Morning Phase over Beyonce, Ed Sheeran, Smith and Pharrell. As the announcement was made, Kanye West attempted to take the stage and recreate his infamous Taylor Swift moment but quickly turned back into the audience. After the show Kanye ranted about Beck’s win (shocker), insinuating that Beck isn’t a real artist and that Beyonce should have won.
Despite West’s shenanigans, this year’s Grammys had something for everyone. Now it’s time to start looking forward to who will be taking home hardware at the 58th Grammys next year.