If you were one of the people who attended the annual Study Abroad Fair this past Thursday, I’m sure your mind has been spinning with the endless opportunity that being a SUNY Oneonta student has offered you. If you were unable to attend the fair, you should know that being a student at a SUNY school allows you to have over 600 study abroad programs to choose from, including semester programs, academic year programs, as well as international internship programs.
There were representatives from more than 10 SUNY schools as well as overseas universities speaking about their specific programs and what they offer. If you did not get a chance to stop by and talk to these people, you can still learn more about the different options you have concerning international travel through the school by visiting the Office of International Education, located in 103 Alumni Hall. The Office of International Education is there to help you with everything concerning study abroad, from where you want to travel, to which program is right for you, even the application process. To learn more you can either e-mail [email protected] or call 607-436-3369.
Danielle Rennard, a senior at SUNY Oneonta, spent a month of her summer 2013 in Australia through a program called International Student Volunteers (ISV). ISV is a program which is perfect for those who can not take an entire year or semester to study abroad due to their curriculum requirements. Rennard first heard of ISV when a spokesperson came to one of her classes during her sophomore year. She learned that students could either travel abroad for two weeks and volunteer with animals and the environment or work with people. They could also travel abroad for a month and spend half of the time volunteering and the other half traveling. At this point, the destination choices were Australia, The Dominican Republic, South Africa, Costa Rica and Thailand, however they’ve recently added New Zealand as an option. Australia is the country that caught her attention, having wanted to travel there ever since she was young. “Something about the beautiful and unique landscapes and their laid-back attitude has always been appealing to me,” is what Rennard replied when asked how she decided on which country to go to.
From there, Rennard was on her way to spending a month in Australia. She said that the application process was fairly simple, including not much more than filling out some forms, sending them to ISV and waiting to be accepted. The hardest part of the preliminary steps of going abroad, for her, was packing. “I obviously didn’t want to overpack,” Rennard said, “but it seemed like packing one 50 pound bag for one month was not nearly enough.” However, after her arrival in Australia, she realized that as long as she had the basics she would be fine. And, as she pointed out, if you forget anything you can always buy it while abroad.
Because Rennard did a month volunteer program instead of a semester or longer program, she wasn’t required to have any of her experience count for college credits. Although she opted not to go through academic advisement and attempt to get college credit for volunteering, her trip benefited her in many other ways. “I was able to put my volunteer experience on my resume which is pretty cool! I had an internship over this last summer and as my boss looked over my resume during the interview the line that stated I volunteered in Australia automatically caught her attention and we ended up talking about traveling and how much of a beneficial experience it is for at least an hour.”
Although Rennard did not receive financial aid from the college because she was not getting class credit for her time abroad, she had different ways of saving money. For example, when going out, she would only allow herself to bring a certain amount of money with her, and leave the rest in the hotel or wherever they happened to be staying. This allowed her to spread her money out evenly throughout the trip, while still leaving cash aside for the big excursions she wanted to do such as skydiving and white water rafting.
When asked if she got homesick at all while away, Rennard responded, “I didn’t exactly get homesick, and I think it’s because I was constantly busy or doing something. I was so interested in learning as much as I could about the place I volunteered and traveled to that time seemed to just fly by.” She also made many friends from all over America while abroad, and was even able to have a reunion at the beginning of the summer with most of them.
The largest cultural difference she observed while abroad was that the people in Australia were much more laid-back, which was one of the reasons she wanted to go. She also observed that Australians tended to speak their minds more openly, which, she said, “…wasn’t always a bad thing. It just took some time to adjust to their lingo and not freak out when a stranger seemed to invade my space bubble and say some things that might be taken as offensive here in America.”
Overall, Rennard had an amazing experience volunteering abroad with ISV. When asked if she would recommend going abroad to other students, her answer sums up her journey perfectly: “I would absolutely, 100 percent recommend studying, volunteering or interning abroad. It is a chance to go out of your comfort zone and learn about a brand new culture and lifestyle. It leaves you more open-minded and is definitely a time that allows you to find out a lot about yourself. It will leave you with experiences and friendships that you will never forget and hopefully encourage you to travel more.” 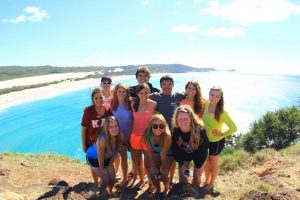