Sunday, September 7, was Derek Jeter  Day at Yankee Stadium. The Yankees were scheduled to play the final game of a three-game series against the Kansas City Royals.  However, before the first pitch was thrown the Yankees honored their beloved captain, Derek Jeter, with a 45-minute pre-game ceremony.

The day began with an introduction of some of Jeter’s former teammates, including Bernie Williams, Andy Pettitte and Mariano Rivera, the former Yankee closer and future hall of famer. Rivera had a similar ceremony in 2013 in honor of his final season.  Jeter’s family was then introduced, along with guest appearances by MLB hall of famer Cal Ripken Jr. and NBA icon Michael Jordan.

Jeter and Ripken have always had a strong relationship. Jeter has said that he thought of Ripken as a father figure, and used to call him to ask questions about the game and playing the right way. Jordan’s appearance was more of a surprise as Jeter and Jordan’s relationship has never been publicized.  But having Jordan, one of the greatest basketball players of all time, definitely added to the ceremony.  Finally, kids from Jeter’s charity, the ‘Turn 2 Foundation,’ were introduced, putting a smile on all 48,110 faces in the sellout crowd.  The Yankees organization donated a check for $222,222.22 to Jeter’s charity.  This amount represented Jeter’s number two he’s worn proudly on his back for the last 20 seasons, the number two. After the introductions, Jeter gave his highly-anticipated speech. In his address to the crowd, he turned the attention off of himself, as Jeter is known to do and thanked his family, the Steinbrenner family (owners of the Yankees) and the fans, who applauded his every word.

Jeter also included some memorable quotes. He said, “I’ve had the greatest job in the world.  I got a chance to be the captain of the New York Yankees…I want to thank you [the fans] for helping me feel like a kid for the last 20 years.” Jeter ended the ceremony by telling the crowd, “alright we got a game to play,” a vintage Jeter comment.

Back in February, Jeter announced that the 2014 season would be his last, putting an end to his 20  year  hall of fame  worthy career.
In his 20-year career, Jeter has only missed the playoffs twice; once in 2008 and last season.  His resume includes a Rookie of the Year award, five World Series Championships (1996, 1998, 1999, 2000, 2009), 14 All-Star Games and more hits than any other shortstop in the history of Major League Baseball.

But even with all of these awards, Jeter will be remembered and defined for his character above all else. He has played the game the right way throughout his entire career.
Jeter has played through the spotlight of the powerful New York City media and surfaced unfazed.  He avoided the steroid era that brought down the some of the biggest names in baseball, including Alex Rodriguez and Barry Bonds.  His will to win, his clean record, his work ethic and his ability to inspire youth for two decades is what made Derek Jeter the Yankees eleventh captain and the face of baseball.  Even if they are weren’t Yankee fans, lovers of baseball tipped their caps, for the skinny young kid out of Kalamazoo, Michigan. 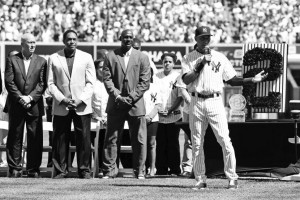