On September 9, in The Flint Center in Cupertino, California, the world watched as Apple C.E.O. Tim Cook continued to define his tenure as the second face of the iconic brand in the very same auditorium Steve Jobs introduced the original Macintosh. This, as his second major product unveiling, truly started to show the direction that he plans to take the company. He introduced the next generation of the iPhone, with two separate models. In addition to the mobile devices, he announced the company’s entrance into the wearable technology world.

The Apple Watch, slated to come out next year, marks the company’s dive into the next phase of the future. The device is made from beautifully rounded aluminum with a figure reminiscent of the small square iPod nano introduced a few years ago. It allows us an even more seamless connection to the world. Maps, messages, e-mail and even phone calls are among the simplest things this device has the capability of doing. The only issue is that it needs to be connected to an iPhone to be truly utilized. So, the price point, well over $300, may keep the device from hitting the full mainstream market.  Every two years, instead of just upgrading their phone to the newest device, consumers will want to upgrade both and will have to spend nearly $700 instead of the still exorbitant $250 that people now spend on average when their contracts expire. It is also interesting to note that it is the first major innovation in Apple that doesn’t have the “i” pre-fix since the iMac started sixteen years ago. 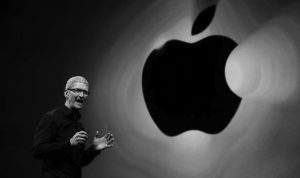 As far as the phones are concerned, Apple is heading in a new direction. In direct response to Samsung’s stake in the market, they have increased the size of their screen and actually offered two different sizes. In comparison to the 4-inch screen of the 5s, the iPhone 6 model has a 4.7-inch screen while the iPhone 6 Plus boasts an impressive 5.5-inch display. Both phones are packed with an improved camera, resolution and an A8 processor, which allows the phone to operate approximately 25 percent faster than the iPhone 5s.

Coming with the new phone and available for download on all phones later than the iPhone 4s, starting September 17, is iOS 8, an update and improvement of last year’s iOS 7, which was the first big aesthetic change in Apple’s operating system since the inception of the iPhone. One of the main improvements consumers will see comes in the messages app. It will now allow users to mute certain groups and send any type of media (video, picture, voice) seamlessly into a message. Its new application, “Health” is an Apple-made version of many apps that have already been popular for years, like “Argus”. It helps track the user’s activity and calorie intake to help them be healthier versions of themselves. It also acts as a Medical ID bracelet and includes information such as allergies, medical conditions and what to do in case of emergency.

Another major development announced at the event was Apple Pay, which will allow users to save credit card information and use it with a seamless tap of the phone whether the shopping is done online or at brick and mortar stores. It has garnered support and interest from many retailers, including McDonalds, Walgreens, Bloomingdales, Staples and Whole Foods, and plans on being accepted at even more retailers by its October release.

For now, Apple’s announcement can be taken as a sign for the future. Ultimately, consumers will decide how successful Apple Watch and Apple Pay can truly be. But, if the past is any indication for the future, these devices will penetrate the mainstream market and become commonplace sooner rather than later.