As we all know, the ALS Ice Bucket Challenge has taken the spotlight for viral happenings. Since the start of this charitable feat, the foundation has raised over $94 million, according to the Boston Globe. The money raised goes toward researching a cure for ALS.
ALS, Amyotrophic Lateral Sclerosis, is a disease that slowly destroys the motor nerve cells. The destruction of such cells in the brain and spine area makes movement very difficult, if not impossible, and also hinders speaking and breathing. ALS is more commonly known as Lou Gehrig’s disease. Unfortunately, one in every 1,000 Americans contracts this disease. The Ice Bucket Challenge has not only raised an extensive amount of money for the ALS association, but also raised awareness of the disease. If asked prior to the challenge going viral, most people would probably say that they have heard of the disease but do not know what it actually is. Thanks to the advocates for ALS and the help of this challenge, more and more people are aware of the need for a treatment and a cure.
A man named Anthony Carbajal made a video showing the unspoken and rarely displayed horrors of the disease that has had a very large impact on not only his family, but also himself. He explains the toll the disease has taken on those around him, and announces that he was diagnosed with ALS at age 26.
This challenge has reached millions of people, including Oprah Winfrey, Mark Zuckerberg and George W. Bush, among many others. It was a fun challenge for people of all ages to participate in—especially during the summer time!
So now the question rises: out of all the challenges out there, how did this “Ice Bucket Challenge” reach out to celebrities and other well-known people? Where did this begin? Originally the famous ALS Ice Bucket Challenge had nothing to do with ALS. It was a challenge created by Internet users to raise money for any charity of the participant’s choice. A young man named Chris Kennedy was the first to choose to donate to ALS. With a simple hashtag, (#StrikeOutALS) the idea quickly reached Pete Frates. Frates was captain of the Boston College baseball team and had many connections; this is what helped him spread the challenge to such great distances.
The ALS association uses at least 28 percent of their earnings on research, and an overall 79 percent on programs and services. However, when donating there is a box available to check that allows all money donated by a participant to be used solely for research. According to the ALS Association website, [an approximation of] the expenses are divided in the following areas with their respective percentages: 14 percent Fundraising, 32 percent Public and Professional Education, 19 percent Patient and Community Services, 7 percent Administration and 28 percent Research. Consider yourselves nominated for the Ice Bucket Challenge! 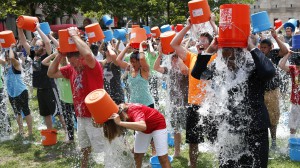