Rape culture is a means of adapting rape into our society’s lives. It’s seen predominantly in the media– through television shows, movies and the Internet. It has even become a part of our everyday language. We participate in rape culture when we use the sexual act of abuse loosely 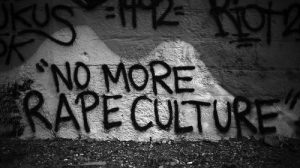 and out of context.
It has become a culture where we find ourselves incorporating rape into our lives using it as a joke or to describe some activity, “That test just raped me.” The idea here is that the test was hard and you probably failed it. That is rape culture. When we use rape as an expression and not as a crime, we are reducing the crime and the validity of the victim’s experiences. Although we use rape as a form of expression or joke, the way people use “gay” in their language, it’s a matter that deserves attention. If they have commercials about the proper use of “gay” it’s about time our society recognizes their fault when using the word “rape.” In doing this, we are unconsciously saying that rape is not an issue.
This idea of rape culture raises the issue that rape victims are “asking for it.”
Joking around with the idea of rape gives others the notion that rape isn’t a big deal because those who were victimized deserved it. Women, specifically, are told that rape is their own fault because of the way they were dressed or because they did not know how to say “no” effectively or couldn’t fight off their perpetrator. When we blame victims and allow others to make fun of a crime committed on innocent people, that is when we create a backwards culture that can only become more backwards.
Rape culture is becoming part of our society’s pop culture. We are accepting rape and making it new by using it as a filler in our daily conversations. It’s definitely something to be conscious about for future use or to be conscious of others that are actively participating in rape culture. It may be difficult to change the habits of others who engage in rape culture but changing our own habits is within our control. Rape cannot be a culture, rather a problem to be addressed.