Johnny Manziel’s life is better than yours…and he knows it.

Ever since Johnny Manziel won the Heisman as a freshman last season, he’s taken the media world by storm. The almighty “Johnny Football” became a complete cultural icon in the realm of college sports last season when he led the Texas A&M Aggies to victory over the “unbeatable” Alabama Crimson Tide. Manziel also unfathomably led the Southeastern Conference in rushing as a quarterback when he wasn’t even expected to win the starting job. For obvious reasons, Manziel’s college football prowess and on-the-field talent cannot be denied.

The problems football fans tend to have with Manziel come from how the media covers him off the field. On several occasions, Manziel has been seen publicly intoxicated and found with fake IDs. Manziel’s quick transition to fame made him a little unfamiliar with the dangers of paparazzi, but Manziel has had no problem living his life like he always has, even before the fame.

Manziel also dominated headlines recently for his alleged autograph scandal. Throughout the month of August, it was rumored that Manziel had made a direct profit from signing autographs, which is a violation of NCAA rules. The situation was investigated and eventually came to a verdict that no evidence suggested Manziel had profited from signing autographs. However, the NCAA ruling was that Manziel should have been aware that his autographs may or may not have been used for commercial purposes. As a result, Manziel was suspended for the first half of the Aggies home opener against Rice University. In the second half, Manziel threw for three touchdowns and rushed for one as the Aggies won with ease.

The sports media business is often obsessed with good guys and bad guys. If there’s ever any uncertainty about a player’s social status there tends to be a media frenzy as a response. Recent examples of this are Tim Tebow and Jeremy Lin because fans’ opinions of them as people are usually split down the middle. Tebow donates to charity and worships God in his spare time, but fans doubted his abilities to have quarterback success in the traditional sense. Lin overcame racial stereotypes and crticisms of his ability to live his dream of starting in the NBA, but there was always scrutiny as to how good he actually was, just as the media did with Tebow when he was with the Denver Broncos. Those are two big media crazes that, believe it or not, are very similar to Manziel’s in the aspect of good guys, bad guys and societal scrutiny.

At this point, most football fans are split down the middle on their opinions on Manziel. His terrific abilities on the field combined with his loose cannon attitude off the field bothers many people. Manziel is not afraid to act however he wants, wherever he wants, and that makes him a hot topic for media. The mixed opinions from fans could not be more beneficial for the media, and that’s exactly why Manziel is on television every single day. CBS recently announced that they have a camera designated entirely for Manziel on their coverage of the Aggies and Crimson Tide rematch. It is almost unbelievable how famous he has become in the past year.

The crazy part is that “Manziel Mania” has only just begun. Just wait until he gets drafted and the debate of whether or not he’ll have a successful NFL career sinks in. This intense coverage will drive a lot of bitterness from fans towards Manziel in months to come. Just remember it’s the media’s doing, not Johnny Manziel’s. 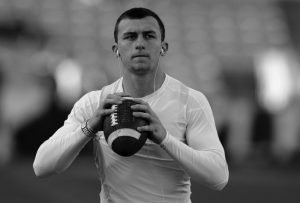