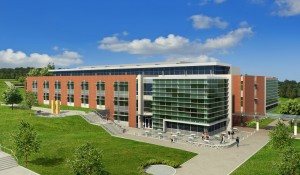 Change, something so celebrated by students and professors alike, is being seen all around the campus of SUNY Oneonta. Ever since last fall, Fitzelle and several other areas around campus have been in renovation. Though Fitzelle is the most obvious site of change, there are others planned for this coming summer and beyond; namely, new parking lots, the addition of faculty offices to Milne library’s third floor and a renovation of MacDuff.

The reconstruction of Fitzelle began over the summer and is to continue on through to the summer of 2014. These renovations are part of a major renovation project that the Faculties Planning and Safety department is continuously working on. The building was chosen because “It had a lot of issues with the way it was built and it housed several programs” according to Thomas Rathbone, the head of the Faculties Department. Many of our buildings around campus were built during the 1960s and are due for a revamp.

Fitzelle was home to several different departments before the renovations, including the education, mathematics and psychology departments. These have been relocated for the time being to Denison Hall and various buildings, but they can look forward to some exciting improvements to the other building. Some of these additions include: a new methods lab for the education department, the mathematics department will be provided with a new computer lab as well as a few smaller lecture halls. Beyond the educational aspect, there will be a new cafe area, similar to
Jazzman’s but with more of a focus on lunch time food and it will be called Seasons.

While these additions will be very helpful and enjoyable to students and staff, perhaps the most surprising part of the renovation is the bridge, planned to connect Hunt to Fitzelle. “On the outside of the building there will be an atrium and a way that students will be able to enter Fitzelle, take an elevator and go across a walkway to get to the student union” says Rathbone on the addition. Though the pathway will not be covered, the deck will be heated in order to prevent ice buildup during the winter months. “We just have one of the best architectural teams. They’ve been very helpful in many ways, you can’t imagine the number and variation of decisions that have to be made” says Mr. Scott Braton, the Faculties Program Coordinator. The new design also provides what Barton calls “a new link through the core of campus.”

Due to the large number of offices that were once located in Fitzelle, the faculty and staff have been displaced all around campus, in sometimes obscure locations in the interest of giving them some sort of office space. But with 14 more professors to be added come fall semester; there is just not enough room. Wherein lies the new plan for the third and notoriously “quiet” floor of Milne library. They plan to make the space as versatile as possible, with some spaces also available for group study and with an “identifiableresource management system” or a way to find out automatically which rooms are taken and which are open.

However, the conversion of carrels into faculty offices does not sit well all across the board. “There is faculty concern. The whole idea that you could put faculty into carrels is a problem. They’re small and they’re in the library so these new faculty won’t be situated with their departments, and that’s not a good thing” says Dr Jerome Blechman of the Earth Sciencedepartment, also the Chair of the Library department. “I always come the third floor to study. You can get second-floor-quiet in your common room, the third floor is special” claims Megan Barrett, a sophomore at Oneonta. “The third floor is really the only place I can study” says Jordyn Berk, another student.

Hopefully both purposes for the third floor will be fulfilled with the upcoming layout changes. MacDuff is the next building up for renovation in 2015. The third floor of Matteson, which caught fire earlier this semester, is the prototype or model for the design. There will be a mix of doubles and singles in the new building, with some kitchen areas. “We’re looking at implementing LED lighting and looking at some sort of heat control in the prototype of Matteson hall” said Barton of the new design. MacDuff will also have a sprinkler system and the doorways will be wider to allow for greater accessibility. Another transformation on campus is the addition of two parking lots behind MacDuff. Parking on campus at peak hours can be very difficult and this has been increasingly problematic with the growing number of students enrolled at Oneonta. The new lots will be located behind the field house and behind MacDuff hall.

Although our campus may feel very concrete, it’s a lot more mutable than most think. The Faculties and Planning department has many changes and renovations in store for SUNY Oneonta. In the next few years the campus will see the reconstruction of many of the suite buildings, starting off with MacDuff. As Rathbone states, “There’s nothing so permanent as a temporary solution” and hopefully these changes will be able to successfully serve students and faculty for years to come.