A new exhibit debuted in the Martin-Mullen Art Gallery last Thursday. The Fine Arts building was buzzing with local art lovers for this public reception of “Moments In Time.” 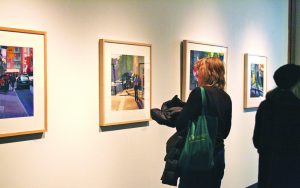 The gallery is a compilation of Lisbeth Firmin’s works, an artist from the area. They comprise of mostly contemporary realist and urban landscape pieces. Her paintings consisted of acrylic, oil and gouache paints. The oil paints were reserved for Firmin’s wooden panel works, which had much sharper colors to them. The gouache paintings were softer, but Firmin was able to create a good sense of lighting. This is especially true on some of the afternoon pieces featuring the warmer colors of the setting sun. One interesting technique Firmin used on some of her pieces was monotype, a method where the artist paints in black ink and presses it in a printing press. She then went over the image in color, which created a wonderful contrast in her urban paintings. 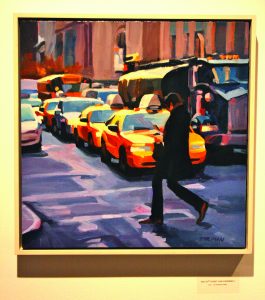 Firmin says that her favorite piece in her exhibit is “The Man in the White Suit.” “I just like the guy,” said Firmin. The piece features a man casually sitting on a bench in a nice white suit. The pose of the man was not planned, since she paints from photographs. “I just took a picture of him in the park,” Firmin said. Despite working from photos, the pictures are sometimes altered. She would take people out from the photo in her paintings if there were too many in the frame. Also, she tries leaving facial features out of her subjects, as a personal preference. Some of these pictures include scenes from the city of Oneonta including the Autumn Cafe and Wilbur Mansion. 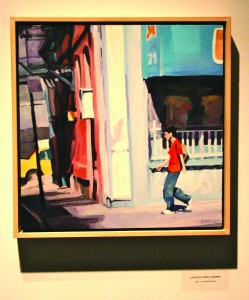 The exhibit came to Oneonta due to Gallery Director and fellow artist Tim Sheesley. Overall, the event was a great success in drawing many locals to the artistic experience as well as some students. The event also featured the SUNY Oneonta Jazz ensemble who did a very good job in setting a certain thoughtful and yet celebratory atmosphere. Not to mention there was also some really good food put out for guests such as mini quiches for this free event. Events for both galleries can be found on the campus website at http://www.oneonta.edu/academics/art/gallery.html or on the facebook page http://www.facebook.com/Martin Mullen Art Gallery.