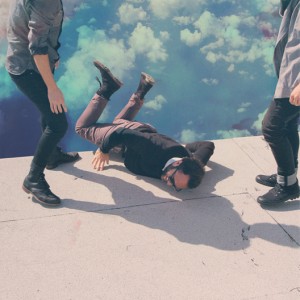 Local Natives’ sophomore album, “Hummingbird,” maintains elements of the band’s earlier work, but is a little less cheery than before.

The L.A. based band gained their first major success after playing festivals like SXSW in 2009. They quickly became known for their hyperactive drums, three-part cathartic harmonies and impressive mustaches. The band has been compared to other big-name indie groups such as Arcade Fire, Fleet Foxes and Vampire Weekend.

Local Natives has been forced to adjust to the loss of bassist Andy Hamm, who decided to leave the band in 2011. The National’s Aaron Dessner contributed to “Hummingbird,” acting as a fifth band member after Hamm left.

“Hummingbird” feels contemplative and angsty compared to “Gorilla Manor”’s carefree summertime brashness. The band’s usual brightness and optimism are replaced by a subtle somberness threaded throughout “Hummingbird.” The death of lead singer Kelcey Ayer’s mother last summer had a far-reaching impact on the album’s sound.

In “Columbia,” Ayer cries “A hummingbird crashed right in front of me, and I understood all you did for us. You gave, and gave, and gave, and gave…” Ayer belts out his insecurities, wearing his humanity on his sleeve, singing “Every day I ask myself, am I loving enough?” Such emotional honesty is raw and powerful against the sparse, crescendoing melody.

“Breaker” and “Wooly Mammoth” were other standouts. “Breaker” encompasses a comprehensive sound, busy with buzzing guitars, handclaps and a soothing chorus of “Ooh, Oohs…” — the sound that put the Local Natives in the spotlight in the first place. This sound, so full of confidence and vitality, contrasts with lyrics which address feelings of uneasiness and discontent with life, “Breathing out/ hoping to breathe in/ I know nothing’s wrong/ but I’m not convinced.”

A song as burly as the beast it’s named after, “Wooly Mammoth” demands your full attention with powerful vocals. Matt Frazier is a force to be reckoned with on the drums. The brilliantly mustachioed Ayer chants, “Spill yourself at her feet/ Stamp me out flickering.” The opening of this one brings to mind recent Black Keys’ work. This is definitely the most hard-hitting track on the album.

“Hummingbird” won’t instantly make your jaw drop. It’s the kind of album that requires multiple listens. With each listen, you’ll pick up more details that help you appreciate the band’s subtlety and emotional directness. These songs are the kind that will be stuck in your head a week later, but you won’t mind.

While “Hummingbird” isn’t as sun-shiny as its predecessor, Ayer’s voice has never been sweeter. The group harmonies still tug at you to join in. And I’d bet it won’t take long for your feet to start tapping along with the band’s frenzied drums.

By venturing towards darker more subtle territory, Local Natives proved that they’re capable of a more diverse sound. While “Hummingbird” isn’t mind-blowing, there are some gems hidden within that are definitely worth exploring. Sometimes chaotic, always beautiful, and by the end of the album, the title “Hummingbird” seems quite fitting.