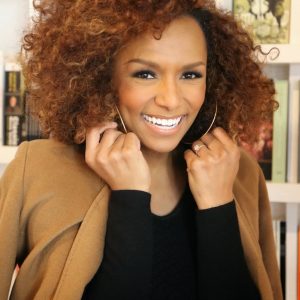 SUNY Oneonta on September 21 to be interviewed by its president, Dr. Nancy Kleniewski.

“This is emotional,” said Kleniewski, choking up. “You’re a role model,” she told Mock.

Mock is a transgender rights activist, contributing editor at Marie Claire, and TV host of “So POPular!” Her memoir is a New York Times bestseller that details her intersectional experience as a youth in Hawaii.

Whether it be the clothes she was given or the way other people addressed her, it seemed as if everything was gendered. Mock explained that she is a unique individual whose identity and personal journey has been influenced by her combination of characteristics.

“I can’t separate my trans-ness from my womanhood, from my being a feminist, from my blackness,” said Mock.

Mock had been indoctrinated into a gender binary system in which she did not fit. Even from as young as age six, Mock knew that she was pretending to be something she wasn’t, but blending in was her survival tactic. Mock told of a few other people that inspired her to be herself, echoing what Kleniewski found so important: someone for youth to look up to.

“Teachers are so vital in creating environments in which kids can feel free to express themselves,” said Mock, explaining that it is a teacher’s job to provide a safe space, especially since many LGBTQ youths are not supported at home.

Mock went to a couple of schools during her transition, having had different relationships with the faculties. At one school, she didn’t receive any support from the staff. Mock would be sent home if her wardrobe violated their gender expectations, given they perceived her as being male. Mock said that she was made to feel like a disruption in class even though she was facing harassment and removal from her educational experience.

Instigated to leave, Mock began attending an accepting school in a poor neighborhood. Mock figured that the faculty was more supportive than those teaching in the upper class neighborhood because they had more experience with “real world issues.” The school had a Teen Resource Center with a Gay Straight Alliance and a daycare for teen moms. One faculty member went to all of Mock’s teachers to make sure that her chosen name was on the attendance roster. Mock then went on to be the captain of the volleyball team and a participant in student government.

“I want to take up space in this school. This school is also mine,” said Mock.

Mock met a transgender dancing teacher who identified as a “mahu,” a Hawaiian term referring to someone who “occupies the third gender space.” This teacher explained that, like all women, she is unique in her womanhood; she did not aspire to fulfill the westernized stereotype of a woman. Personally knowing a transgender teacher helped Mock’s transition feel more tangible. She similarly idolized Claire Huxtable, who was an African American woman on TV and a strong, complex character.

Mock later went to college and began saving for gender reassignment surgery, which was aided by her work in the sex trade. Mock said that no one should be ashamed of what they choose for their body or career. She said that her body was her only asset at the time, as she lives in a society that isn’t structured for women, transgender people, or African Americans.

“Women aren’t free in their own bodies,” said Mock.

She identified this as the cause of many women’s issues such as street harassment, slut shaming, rape culture, and denial of reproductive rights.

“40 percent of homeless youth identify as LGBTQ,” added Mock, further citing the ways in which minorities are marginalized.

Many may be shocked by this statistic, but it makes more sense when considering that this community faces discrimination from prospective employers, prospective landlords, and possibly their own family.

Still, Mock is hopeful for the future.

“The new generation has embraced a kaleidoscope of gender identity,” she said, encouraging everyone to continue these important discussions, even if it means getting uncomfortable.