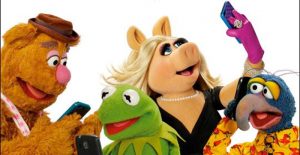 The new Muppets show came out Tuesday, September 22 on ABC.  For anyone who doesn’t know who the Muppets are, shame on you. The Muppets are a group of puppets created by Jim Henson. In the 1970s and 1980s, there was a series called “The Muppet Show” where Kermit the Frog and his friends put on a show with different acts created by the Muppets themselves.  They even had a different celebrity guest each week. The songs played on the show, “It’s Not Easy Being Green” and “Mahna Mahna” became legends. The first Muppets movie came out in 1979 where Kermit and Fozzy Bear traveled the country to start a frog-leg business. After the first movie, many more were made with different themes, characters, and plots, making it difficult to keep up with all of the Muppets.

The story line for the new Muppets show is that Kermit and Miss Piggy broke up, and now they are working on a late night TV talk show together called “Late Night with Miss Piggy”. Kermit is dating Denise, a younger, skinnier pig that is the head of marketing. This makes working with his ex-girlfriend even more uncomfortable. Walter, from the movie, The Muppets, is Kermit’s assistant and is a goofy kid that is not very good at his job. In the premiere, Walter is given the job to distract actress Elizabeth Banks and keep her away from Miss Piggy until the show starts because they believe Miss Piggy has a grudge against her because of a bad “Hunger Games” audition. During his tour of the ABC Studios, he is thrown out of a golf cart twice and beaten up by Banks.

Then there is Fozzy Bear, who is dating a human girl and is the announcer for “Late Night with Miss Piggy”. He tells his classic bad Fozzy Bear jokes and is ignored by Miss Piggy as usual. In the premiere, Fozzy spends the whole time trying to convince his girlfriend’s parents that a bear and a human could have a normal relationship. Dr. Teeth and Electric Mayhem is the house band for “Late Night with Miss Piggy”.

Other Muppets who starred in the premiere episode are Slater and Waldorf as their typical critiquing selves, Sam the Eagle censoring the show, Bobo the Bear as the cue card holder, Pepe the Prawn and Gonzo as writers, and many more classic Muppet characters who all make small appearances throughout the episode.

The producers of the first Muppets Show seem to be taking a new approach to the original plot for this new series.  They are using traditional Muppet traits such as their classic skits and celebrity guest stars. The series is made to show the behind the scenes side of the beloved Muppets and is filmed like a reality show. The Muppets are making a documentary of working on the show together, so there are shots of secret conversations through door cracks, close-ups of reactions, and talking heads where the characters explain how they feel about what just happened. By making the show more modern, ABC is trying to create a show kids will enjoy and parents will watch with them while remembering their own childhood. Though the first episode was not as great as the commercials made it seem like it would be, there is so much potential for it to get better, and the Muppets are always a fun way to spend Tuesday nights at 8 p.m.