Not since the days of the OJ Simpson trial have we seen an athlete fall from grace as hard and as fast as Aaron Hernandez. Hernandez’s fate was sealed on April 15, as he was sentenced to life in prison without possibility of parole for the murder of Odin Lloyd on June 17, 2013. Hernandez’s accomplices, Ernest Wallace and Carlos Ortiz, were charged months ago.

The 11-week trial and 132 prosecution witness testimonies were capped with the guilty verdict. The jury in this case deserves credit for setting aside the high-profile of the accused to deliver a fair, just trial. The motive behind Lloyd’s killing is still unclear, but one source said that Hernandez wanted Lloyd dead because of his alleged knowledge of Hernandez’s involvement in the murders of two people in 2012.

The double life of Hernandez is a complicated one, where the past continued to haunt the new life he tried to lead. Drafted by the New England Patriots in 2009, Hernandez would quickly become a star. He and Rob Gronkowski would form a dangerous tight end tandem and set in motion the trend of utilizing two big, athletic tight ends in the passing game. In 2012, the Patriots gave Hernandez a five-year $40 million contract extension. Not only was he talented, but he nurtured an image of himself, one whose deeds awarded him the 2013 Pop Warner Inspiration to Youth Award, portraying him as a loving father and committed partner.

In his youth, Hernandez was a repeat honors student and shattered Connecticut high school football records. Hernandez’s father, Dennis, was the driving force of his life. He kept Aaron and his brother DJ on the straight-and-narrow path, productive in school and sports. However everything changed in 2006 when Dennis died from complications during hernia surgery. The death devastated Hernandez and pushed him into a dangerous world of violence, drugs and crime.

Hernandez’s “dark-side” of life began after his father’s death. He did not grow up in a suitable environment, as his mother Terri was involved in racketeering and other crimes. Bristol, Connecticut is where he grew up and where the seeds of a criminal life were planted. Hernandez’s behavior began to change, as noticed by Bristol school officials. He began hanging out with unsavory characters, namely Wallace and Ortiz, and never seemed far from these associations.

Even when he left for college at the University of Florida, his behavior and his cronies followed. Hernandez punched a bouncer, tested positive for marijuana and had to deal with his mother remarrying an abusive man. He isolated himself from his teammates in college and the NFL because of his abrasive actions. Despite this, he excelled on the field, winning the national championship and the John Mackey Award (nation’s top tight-end). Although he had a checkered past, his talent was undeniable and opened a door into NFL stardom, possibly a way out of his past life. But he could not shake his demons and criminal life.

The downfall of Aaron Hernandez has been sealed: Promising talent, NFL star, murderer. Formerly number 81 when playing for New England, Hernandez will be trading that number for 174594, his new permanent number as he begins the rest of his life in Bristol County Jail. 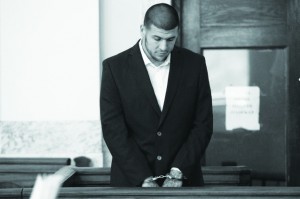