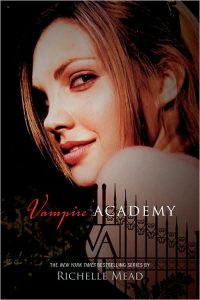 This book is about exactly what the title says, a school for vampires, as well as their guardians in training, dhampirs. Dhampirs are the children of vampires and humans. When humans started to fear and kill the vampires it became illegal for vampires to have relationships with humans. There is a whole vampire hierarchy that the humans do not know about, that includes the two types of vampires: Mori and Strigori. Mori are the good vampires, the royal vampires, and Strigori are the evil vampires that kill humans. Mori are born and can stay in the sun for a little, while Strigori’s burn when the sun touches them.  Mori vampires have magic of the four elements: water, fire, air and earth. The academy teaches them how to live among the humans and how to control their powers.
This story revolves around Rose Hathaway and Lissa Dragomir, a dhampir and Mori’s best friend. Rose and Lissa run away from the academy because they’re mentally connected. Earlier in the year, Lissa’s family and Rose got into a car accident. Lissa and Rose were unharmed, but Lissa’s parents and brother died. Rose has been protecting Lissa to the best of her ability, but she has not graduated into a full dhampir.
One night, Lissa and Rose are leaving their apartment and the guardians from the academy find them, one of them is Dimitri. They bring them back to the academy and force them to stay because Lissa is the last Dragomir princess and is next to the throne.
Throughout the book Lissa is trying to find her place and figure out this strange magic she has. She and Rose try to figure out their connection while dealing with high school drama. Lissa goes off the deep end and finds comfort in the ‘weird kid,’ Christian. Rose tries to make up for lost time with her training and has a crush on her teacher, Dimitri.
The two also have to deal with Lissa’s uncle, Victor, and his daughter, Natalie.
When I first got this book I thought it was going to be similar to Twilight, but the characters and the details of the vampire history are extremely interesting. As the series continues Lissa learns more about her powers and finds people like her. Rose figures out her family’s secrets and figures out her feelings for Dimitri, which leads to a rescue mission by herself. New characters and concepts are introduced, and the story comes to a surprising ending. There is love, blood and action in this series about these teenage girls. The whole series is a quick read that you will not want to put down and the epilogue series, Bloodlines, keeps the story going. Vampire academy gets a 7 out of 10, but the whole series is a 9 out of 10.