The New York Yankees are the most successful franchise in Major League Baseball history. Since their inception in 1903, the “Bronx Bombers” have accumulated 27 World Series titles behind the legendary names of Babe Ruth, Joe DiMaggio, Lou Gehrig, Mickey Mantle and a host of others. As of now, 18 former Yankee players have had their number retired in Yankee Stadium’s famed “Monument Park.”

After he retired, it was all but guaranteed that former shortstop Derek Jeter would receive that same honor. But in an announcement made by the Yankee organization on February 16, three more Yankees will also have their number retired.
Former players Jorge Posada (catcher, number 20), Bernie Williams (center fielder, number 51) and Andy Pettitte (starting pitcher, number 46) will have their numbers retired and a plaque unveiled in Monument Park. Williams will be honored on May 24, Pettitte on August 22 and Posada just one day later on August 23.

While all three of these players may not be considered “great,” they each played an important role in the Yankees’ success at some point from the mid-1990s to their most recent World Series title in 2009. Throughout this run the Yankees were undoubtedly the most successful New York sports team, winning five world championships (1996, 1998-2000, 2009).

So let’s take a look at these three players and the impact they have had in the Bronx.

Williams spent his entire 16-year career with the Yankees, accumulating a .297 career batting average, with 287 home runs and 1,257 RBIs. He was a five-time all-star (1997-2001) and spent time as the cleanup hitter behind Paul O’Neill. While he was a force at the plate, Williams also won four Gold Gloves in center field (1997-2000). He last played for the Yankees in 2006, ending his relationship on a sour note when New York was only willing to invite him to spring training as a non-roster invitee.

But in 2008 the relationship was mended during the last game at the old Yankee Stadium. While the Yankees were honoring past players, Williams was the last player announced and then received a one minute 42 second standing ovation from the crowd. At the end of his career Williams was ranked in the top 10 in doubles, walks, hits and home runs in Yankee history.

While Pettitte will never be regarded as a true “number one starter” for the Yankees, his stats speak for themselves. For his Yankee career, Pettitte finished with a record of 219-127, along with a 3.94 ERA and three all-star appearances. But his true worth came in the postseason.

During October, Pettitte was one of the most dominant pitchers in baseball. His record of 19-11 with a 3.81 ERA does not seem much better off the top, but it needs to be acknowledged that all of these games were pitched against the best teams in the MLB, under the highest pressure in sports.

The one drawback to his career was that he was caught taking human growth hormone (HGH), which is illegal in the MLB. He finished his career with the New York third all-time in career victories (217) and first in strikeouts (2,020).
Posada spent his entire 17-year career with the Yankees (1995-2011), while being named to five all-star teams and winning two Silver Slugger awards. He finished with a career .273 batting average, along with 275 home runs and 1,065 RBIs. He was not one of the most defensively savvy catchers, but did a good job calling a game for egotistical pitchers (Randy Johnson, Roger Clemens etc.).

Some people will argue that the main reason these players are getting their numbers retired is to get fans to come to the park. The 2015 Yankees are not expected to contend for a playoff spot and honoring former players of the glory years will have fans pay exuberant prices for seats at Yankee Stadium. But regardless of what people believe, these three players played an important part in one of the franchises’ best eras. They resembled a team that played the game for each other, and as this era ended the Yankee management switched to a style in which they signed the best player available, regardless of cost or attitude. 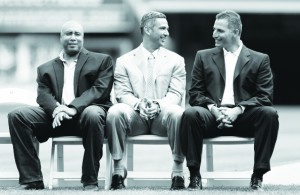