Since 1998, college football’s playoff format (the Bowl Championship Series) has stumbled through controversy and confusion. The BCS was questioned and criticized due to the fact that it used a list of rankings to determine the country’s top teams instead of digging deeper into the numbers to find the nation’s true elite programs. Before the 2013 season, the National College Athletic Association announced a four-team playoff system would be implemented starting in 2014. While the amount of teams may seem low to some, the rules of the new format are something to be excited about.

The seeding process of the four teams is rather simple, with the number one seed facing the number four in one semifinal and the number two team squaring off against the third seed in the other. What makes this setup interesting is the chance for an upset to happen. In the BCS system the top two teams were selected to play each other in the National Championship game and while that certainly makes sense, the second ranked team beating the best team isn’t much of a surprise. With four teams in the mix, there is now a better sense of competition and unpredictability that has been missing from college football for a long time.

Despite the change to a four-team playoff, the NCAA also decided to keep its bowl game system intact, but with a few changes. This season, the semifinal games will be taking place at the Rose Bowl and the Sugar Bowl on either New Year’s Eve or New Year’s Day. These two games are a part of a rotation of six bowls that will be used as sites for semifinal games in subsequent years. The list includes the aforementioned Rose and Sugar Bowls, the Cotton Bowl, Fiesta Bowl, Orange Bowl and Peach Bowl. The five major conferences (Big 10, Big 12, SEC, ACC, Pac-12) are all guaranteed at least one team in each of the six bowl games. It is possible that four teams from the same conference can make up the top four teams but it is also worth pointing out that winning a conference does not automatically give a team a bid in the top four. It is likely that the elite conference, the SEC, will dominate the rankings, but now teams from other conferences have a chance to shock the nation.

The most profound issue with the BCS system was easily its selection process leading many fans to question and scrutinize the choice of teams made by a computer system. This season, a committee of diverse individuals with various experiences in college football will make the selections. Each committee member will rank teams on a weekly basis instead of beginning the process at the end of the regular season. The voting process begins with each member listing their top 25 teams in no particular order, then cutting that list down to six. The six teams that get the most votes from the committee will go through numerous ballots to determine the top four teams, followed by a vote to determine the overall top 25 teams in the country.

It is a new day for college football and many fans will be anxiously waiting for October 28 when the first rankings of the season are released. Their anxiety and excitement will only grow each week as the season winds down to the final selection. Choosing four teams for the new systems will also be a good experiment for determining whether or not more teams can be added to the playoffs in the future. College football made the right decision bringing change to one of the more criticized aspects of its game. 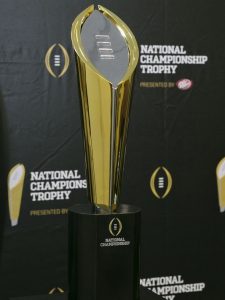