Bobby Lemaire, Sports Editor
In the gold medal men’s hockey game of the 2010 Winter Olympics in Vancouver, Team Canada defeated Team USA 3-2 in an overtime thriller. United States forward Zach Parise tied the game at two, with just 25 seconds remaining in regulation. But 7:40 into overtime, Canadian superstar Sidney Crosby won the game and gold medal for his home country.
It is now four years later and the next Winter Olympics are rapidly approaching. This February, the games will take place in Sochi, Russia, and anything less than first place for the Canadians will be considered a failure. Canada is without a doubt the most talented team, with a who’s who of NHL superstars. In goal, they have the trio of Roberto Luongo (Vancouver Canucks) who was the starting goalie in 2010, Carey Price (Montreal Canadiens) and Mike Smith (Phoenix Coyotes).It is not yet announced who will be the starter, but most hockey experts believe Price will get the nod. Regardless, all three goalies are able to give Canada a chance to win.

Canada’s defense is very good as well. With Drew Doughty (Los Angeles Kings), Shea Weber (Nashville Predators), Duncan Keith (Chicago Blackhawks) and P.K. Subban (Montreal Canadiens) just to name a few, every other team will struggle to get shots and bodies towards the net. In addition, the defense has the ability to join the offense and put up points as well. Weber and Subban have two of the hardest shots in the sport, whose slap shot from the point could be lethal on the power play.

On offense, the defending champs are going to be very difficult to stop. They have the best player in the world, Sidney Crosby (Pittsburgh Penguins), along with John Tavares (New York Islanders), Rick Nash (New York Rangers) and Corey Perry (Anaheim Ducks), who are capable of putting the puck in the back of the net at any given moment. Team Canada has four talented offensive lines; the other countries will have their hands full trying to keep them off the scoresheet.

Not all of the talent on offense involves scoring goals. Patrice Bergeron (Boston Bruins) and Jonathon Toews (Chicago Blackhawks) are two of the best penalty killers in the sport. Both are willing to go down and block a shot in order to prevent a goal, regardless of who is shooting. The effort that both of these players give is a major reason why they are two of the most respected players in the game.

Even with such a talented squad, there are still some obstacles that Canada will need to overcome. Tampa Bay Lightning forward Steven Stamkos is one of the most skilled players in the NHL. He was a shoe- in to make the Canadian team, but on November 11, 2013, Stamkos broke his right tibia while crashing into the net against the Boston Bruins. He is on the roster, but whether he will be able to play, or play at the same level, is still a concern.

A different issue is which players were left off the squad. With a team so talented, there were going to be a couple of players who are good enough to be on the team, but are left off for one reason or another. The most surprising for these Olympics was Lightning forward Martin St. Louis. At the age of 38, St. Louis is performing as one of the top players in the league. Through his first 50 games, St. Louis has 50 points (25 goals, 25 assists). What is even more interesting is that the General Manager of Canada, Steve Yzerman, is also the GM of the Lightning.

It is foolish to already guarantee a team a gold medal, but it’s going to take an amazing effort to bring this giant down. 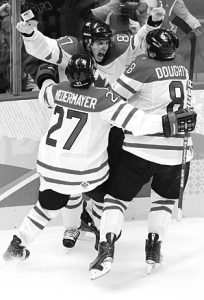