The Knicks are not a good team, it’s that simple. Everyone who watches basketball could tell you that, so why is the organization so unwilling to make a change? When you have an aging team that is underperforming and whose star player can leave at the end of the season, what would be the smart thing to do? Most General Managers would decide to start all over, to get what they can for their star because getting anything in a trade is obviously preferable to having them leave in free agency, receiving nothing in return.
Carmelo Anthony has gone from saying he would like to spend the rest of his career with the Knicks to having a “short list” of places he’d be open to signing with, including the Los Angeles Clippers and the Chicago Bulls. So why not trade Melo for a first round pick in this upcoming draft and possibly some potential prospects, because like former General Manager Isiah Thomas said “Knicks fans will not tolerate a losing team.”

This has become the motto that Knicks Owner James Dolan has decided to run the franchise by even after Thomas was fired for what can only described as gross incompetence. If  “Knicks fans will not tolerate a losing team” then please tell the fans what exactly they have been doing for the better part of two decades? The front office of the Knicks has made questionable move after questionable move, and lo and behold, Madison Square Garden continues to sell out night after night. If anything Knicks fans have been too tolerant of what Dolan and the rest of the front office have done to their beloved franchise. Constantly selling future assets and prospects in the misguided attempt to win now, a strategy that clearly has not worked.

While the Knicks have been plagued with bad contracts and salary cap issues, teams such as the Indiana Pacers, the Portland Trailblazers and the Oklahoma City Thunder have proved that building a team from the ground up with draft picks and young players is superior to signing or trading young assets for veterans who are often on the downward slope of their careers.

Most organizations have realized that this is preferable to signing aging free agents, and this goes for most fans as well. In fact nearly anyone who pays even the slightest bit of attention to the NBA can clearly see that this method is superior. However the Knicks front office refuse to entertain this idea; they want to win now, a sentiment that is not shared by most fans.

Anyone who has watched the Knicks play this year won’t even delude themselves into believing that this team can contend for a title. Even if they were to play better and to sneak into the playoffs, a second round exit would be optimistic at this point. Instead fans want to look to the future, the imagined trades are looking to get the big names out of New York rather than into it. Fans would rather move players like Tyson Chandler, Iman Shumpert or even the face of the franchise Carmelo Anthony, for anything that would help the team rebuild, namley draft picks.

The 2014 draft class is projected to be one of the best in recent memory and because of the trade that brought Carmelo to New York, the Knicks will be on the outside looking in. This has seemingly been the tipping point for Knicks fans, watching Denver take a Jabari Parker or an Andrew Wiggins with a pick that belonged to them would certainly send some fans over the edge.

Hitting rock bottom may be the wake up call this organization needs, the fans really do say enough is enough, it’s time to prove Isaiah right and stop tolerating these losing teams. 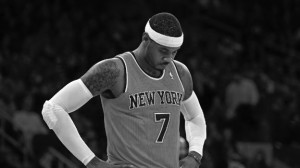