Quarterback: Peyton Manning threw for 5,477 yards and 55 touchdown passes, both NFL records. He only threw 10 interceptions and was sacked just 18 times the entire season. During the playoffs he has only one interception and hasn’t been sacked. But the one question that is constantly being asked is can Manning throw in the cold weather?

Russell Wilson threw for 3,357 yards and  26 touchdowns with only nine interceptions. He had a quarterback rating of 101.2 during the regular season. The one downside is he was  sacked 44 times. Peyton Manning is one of the best at reading the defense and finding the open man. He is one of the best quarterbacks of all time and with the team he has right now is unstoppable on offense. Then again, he has not played against a defense as good as the Seahawks. Wilson is a young talent that has proven his skill. Although Wilson has emerged as a solid quarterback, he is still no match against the veteran Manning.

Running Back: The backfield situation for the Seahawks is clear and has been the same all year— hand the ball to Marshawn Lynch and unleash “Beast Mode,”his play says it all. He rushed for 1,257 yards and for 12 touchdowns. Lynch is a hard-hitting running back who can also blow you away with his speed. The Broncos have two solid running backs in Knowshon Moreno and Montee Ball. Moreno has been above average with 1,038 yards rushing and 548 yards receiving. He has had 10 rushing touchdowns and three receiving scores. Ball had 559 yards rushing with three rushing touchdowns. The Broncos run a pass happy offense with Manning at the reigns, but the numbers his running backs put up were no joke.

Wide Receivers: The Seahawks have had a problem staying healthy in the receiving core. Percy Harvin and Sidney Rice went down early in the season. Harvin was able to come back and play one game in the regular season before getting hurt in the NFC Divisional Round with a concussion, but he will be ready for the Super Bowl. Without their star receivers the Seahawks depended on Golden Tate, Doug Baldwin and their tight end Zach Miller, each with five receiving touchdowns. The Broncos receiving core has been referred to as the “Four Horsemen” all season. This includes Demaryius Thomas, Eric Decker, Wes Welker and Julius Thomas. Demaryius Thomas had 1,430 yards receiving with 14 touchdown receptions. Eric Decker had 1,288 yards receiving and 11 touchdowns. They have more yards combined than the top four receivers of the Seahawks. Not to mention the Broncos also have Welker, who had 778 yards receiving and 10 touchdowns, and tight end Julius Thomas, who had 788 yards receiving and 12 touchdowns caught. There has been no match for these receivers yet.

Advantage: Denver
Overall: The Denver Broncos by far have a much better offense than the Seattle Seahawks at almost every position. The key players for each team to win this game are Manning and Lynch. If Manning can get to this defense, then they have no way of losing. If the defense stalls him then Lynch is going to have to have a great game in order for the Seahawks to come out on top. 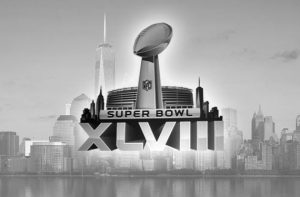