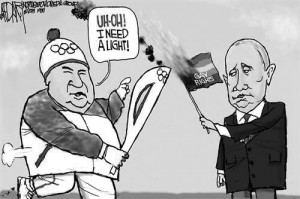 Despite the passage of Russia’s anti-gay propaganda law this past June, Russian President Vladimir Putin has reassured the world that homosexuals will be welcome at the 2014 Winter Olympics, which are set to begin in Sochi during the first week of February.
Russia’s anti-gay law has been the center of controversy since its passage last June. The law places a ban on the “propaganda of non-traditional sexual relations,” specifically to minors and effectively makes it illegal to distribute any kind of material advocating equality for members of the LGBT community, to hold gay pride parades or to even suggest that homosexual relationships are equal to heterosexual relationships. Although the law does not specifically mention homosexuality, it is meant to encompass any relationship deemed non-traditional, essentially placing homosexuality in the same category as pedophilia. Under the law, anyone who advocates equality for homosexuals is subject to fines and potentially jail time.
Homophobia is still widespread in Russia and the people of the country are overwhelmingly hostile towards homosexuals. The extremely negative attitude towards homosexuality in Russia is due in part to the fact that homosexuality has long been condemned and discriminated against by the Russian government. Homosexuality was not decriminalized in Russia until 1993 and was considered to be a mental illness until 1999.
Since the law’s passage, the amount of hate crimes motivated by homophobia has seen a sharp increase. The Russian government has also used the law as justification for the arrest of a gay rights activist and the arrest of four Dutch tourists who were said to have been discussing the topic of gay rights with minors.
Putin has attempted to justify the law, stating his reason for signing the bill was that the Russian people demanded it and that the bill is meant to protect the children in Russia. He has also stated that since same-sex relationships do not produce children, the law is also an attempt to combat Russia’s low birth rate.
The passing of the law has been met with severe backlash and condemnation from numerous human rights groups, 27 Nobel prize winners in the fields of science and the arts, and various foreign governments, including the United States. Leaders from the United States, France, the United Kingdom and a number of other countries have refused to attend this year’s Olympic games, effectively boycotting Russia for its passage of the controversial law. Some people have even called for an outright boycott of the games.
Putin has stated that gay people who are attending the games will not be discriminated against and that they should feel at ease while in the country. However, Putin has also stated that due to the country’s “propaganda” laws, they must not express their views on homosexuality to minors. Despite the international backlash, calls for the boycotting of the games and the overwhelmingly negative feedback from people around the world, including many current and former Olympic athletes, the Russian government continues to stand by it’s decision and encourages any people in attendance at the games to comply with the law or face fines.