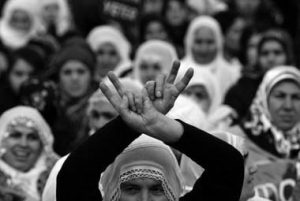 For the first time in decades women in Turkey will be able to wear their traditional headscarf coverings to government buildings and civil service jobs without fear of any disciplinary action. Earlier this month, Turkey lifted its nearly 90-year-old ban on wearing hijabs. Women were banned from wearing the hijab headscarf in the 1920s, when Mustafa Kemal Atatürk founded Turkey as a secular state. Atatürk was focused on the modernization and westernization of the nation, and interested in improving the lives of women. And so the ban of tradition Muslim garb was lifted.
Women were still able to wear the headscarf out in public, but not to government buildings or to their civil servant jobs. Teachers, lawyers and other government workers were kept from public buildings like classrooms and courtrooms if they didn’t comply with the hijab ban. In one case, a Turkish court ruled that a teacher who wore the headscarf outside of class was ineligible for a job promotion. Although the ban was designed for only the public sector, it was reported that women found it difficult to get work in private firms if they wore a headscarf.
The ban has always been a source of controversy in Turkey, where roughly 95 percent of the population is of the Muslim faith. Many Muslims believed that the government was too strong in pushing secularism upon its citizens. When asked, most women who wear headscarves in public said that they did so because they believed it was a religious obligation and a source of their Muslim identity.
Prime Minister Recep Tayyip Erdogan, whose wife sports a hijab, praised the change as a move that will improve the rights of all citizens. In the past, some women have been reluctant to join the work force because they would have to remove their headscarf at the office. Young women interested in pursuing higher education had to choose between two basic rights-education and religion. To go to a public university, a woman would have to remove the headscarf that she felt obligated to wear. Now, women can wear the head covering scarves at almost all civil servant jobs. For now, the headscarf ban will remain for those in military, police and judiciary positions, but there have been hints that soon the ban will be lifted for people in these positions as well.
To Western cultures, these headscarves represent the repression of women in the Middle East. But the restriction of wearing these scarves is equally repressive. Something as simple as deciding an outfit is determined by forces out of their reach. The way they dress is determined by law, and these laws are written by men. For Prime Minister Erdogan, this new law is a step towards more freedom for women, they may choose to wear the hijab, but they certainly aren’t required to.