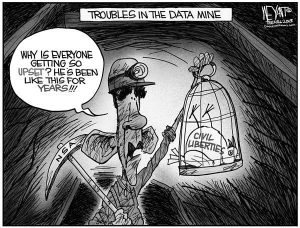 This past week, Member States of the European Union held a conference with the intent of discussing the future of the European economy. However, one unplanned subject dominated the headlines and discussions. The United States has for years been spying on not only the citizens of some of its closest allies, but their leaders as well. In France, President Hollande has demanded answers from the United States over a recent newspaper article claiming that millions of French phone and Internet conversations were being read and monitored by the U.S. National Security Agency. On top of this, Germany has brought in the United States’ ambassador to explain why their Chancellor, Angela Merkel, had her personal cellphone tapped for surveillance. Both France and Germany have threatened a diplomatic response if these allegations turn out to be true, with Germany going as far to say that relations with the United States will no longer be “business as usual.” Protests have been filling the streets of Berlin and Paris over the flagrant violation of privacy by a foreign country super power.
The current diplomatic fallout got its start this past June, when the British newspaper “The Guardian” released a headline claiming that the United States government was monitoring every text, email and phone call in the entire world, not limited to terror suspects. Since then, the world has responded with anger and now the United States faces mounting pressure from its closest allies for answers. This groundbreaking story has negatively affected the U.S. and was not the result of foreign espionage. It came from a U.S. citizen who worked for the very government he would end up hurting. Edward Snowden was a tech support specialist who had worked for the CIA and NSA. This position gave him access to thousands of classified documents. Upon reading the documents which showed the U.S. was secretly carrying out surveillance on a global scale, Snowden decided to flee the United States and release the classified material to the Guardian, and in turn, the world.
Now Snowden lives in Russia, unable to leave because he is wanted for treason in the United States. Although Snowden is no longer releasing new documents, the damage that his actions have incurred on his former government endures. In the United States, the head of the National Security Agency has repeatedly been brought before Congress to explain his agency’s actions.
Abroad the United States’ closest allies, not only in the war on terror but since the end of World War II, are re-evaluating their diplomatic relationship. While few expect the long-term relations between the allies to change, the fact persists that the world now knows that what they text to their friends, or what they say in their emails, or post on Facebook is being watched by the United States of America in the name of national security and you are no exception.