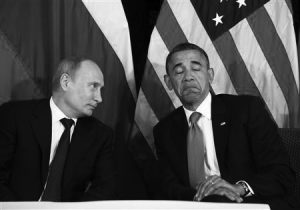 On Tuesday September 10, President Obama interrupted primetime television to speak about the crisis in Syria and the United States involvement. Syria has been fighting a civil war for two years and on the twenty first of August it took a turn for the worse. The Syrian government used Sarin gas on thousands of its own citizens. President Obama told the public about how the Syrian government gave out gas masks to their troops before gassing 11 neighborhoods, including women and children. After explaining the chemical attack in detail, the President made it clear that if fighting spills beyond Syria’s borders it would threaten our allies like Turkey, Jordan and Israel. Obama stated, “I determined that it is in the national security interest of the United States to respond to the Assad regime’s use of chemical weapons through a targeted military strike.” He made a point of saying that he would not put any American boots on Syrian soil, emphasizing that he has spent “four and a half years trying to end wars.” Although the President has the power to move troops and order military strikes, he has decided to look to congress stating, “I am the president of the oldest constitutional democracy” and believes the decision to strike Syria should be up to the people. This was the plan, until the Russians gave us an alternative. 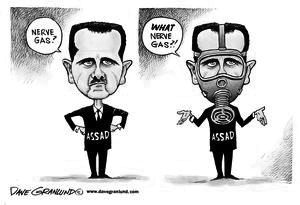 Russia, Syria’s biggest ally, told the United Nations and the United States that they can push Syria to give up their chemical weapons, which Assad confirmed they have, without the need for military action. The plan will require Syria to give up their chemical weapons to ultimately be elimnated by the United Nations and for Syria to join the Chemical Weapons Convention, which prohibits chemical weapons. After hearing this option, Obama decided to tell Congress to hold the vote on military action in Syria to see the Russians plan would work. On Wednesday September 11, Russian President Vladimir Putin wrote a letter in the New York Times to the American people, arguing that our government has been bypassing the international law set by the United Nations. On Tuesday September 16, a United Nations team confirmed evidence of chemical weapon use in Syria. Russia believes the rebels, not the Syrian government, are to blame. The Syrian government has asked to join the Chemical Weapons Convention so at this point it seems like Putin’s plan is working and they may have stopped what seemed like certain military action by the United States. Secretary of State John Kerry told CNN,  “A week ago, the Syrian Regime did not even admit that it even had chemical weapons,” Secretary of State Kerry also stated “Today, that regime has agreed, at least through the Russians . . . to rid itself of those weapons.” Over the weekend the United States and Russia agreed that Syria must submit a list of their entire chemical weapons arsenal. UN inspectors must be on the ground by November and all Syrian chemical weapons production equipment must be destroyed by the end of November.