Anthony Barone, Contributing Writer
Burn Down the American Plantation authored by anonymous members of the Revolutionary Abolitionist Movement was released on May 5, 2017. The book highlights the struggle of African Americans in the United States, demonstrating the meaning behind RAM, and outlines the group’s goals for liberation. “Building the revolutionary forces capable of competently engaging in this conflict requires firm grounding in emancipatory political objectives and an understanding of the necessity for militant self defense.”

RAM believes that educating the public with an anarchist ideology that emphasizes racial liberation is one of the key components for establishing a revolutionary body. Once this is achieved, militant self defense comes into play through the previous radical education. The book advocates arming the now radicalized popul 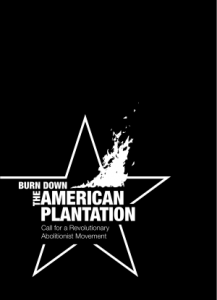 ace while utilizing the masses growing anger in an organized manner in order to bring down the capitalist apparatus which, as RAM firmly believes, is the United States.

RAM also believes a new form of social organization must take its place.

“Those who exploit us withhold the fruits of our work from us will not willingly give up their power…Resources produced locally are primarily for the people who live their, and the intention is equal distribution among the communes…”.

In this excerpt from the book, RAM illustrates the basic principles of how their ideal society would look. The capitalist class will have the means of production taken from them and would then be handed to the working class to manage. When this is done, all products produced will be distributed equally amongst the communes, towns, in the new society, much like current day Kurdistan.

RAM emphasizes the Black struggle for emancipation in its organizational foundations.

“The difficulty in finding a political or social resolution is due to the fact that the system of slavery has not been abolished. It is still enshrined in legislation, and, more importantly, is codified into the subconscious makeup of the U.S. citizenry.”

RAM makes an excellent point. Legally, slavery is allowed to exist as stated in the thirteenth amendment, “Neither slavery nor involuntary servitude, except as a punishment for crime whereof the party shall have been duly convicted, shall exist within the United States, or any place subject to their jurisdiction.”

This amendment therefore allows slavery to exist in prisons in the form of a prison industrial complex. This allowed the capitalist system post-1865 to be used against the African American, and thus perpetuate a cycle of extreme poverty and drug addiction within Black communities. Once drugs became criminalized, Black citizens could be exploited for free or severely underpaid labor. RAM believes it is the new form of legal slavery. Capitalism uses racism to its advantage, targeting small Black and Latino populations so that their labor can be used to compete with foreign labor outlets.

However, the elites do not want the minority populations to know they are being targeted. The police and government agencies are cracking down on minority groups, as they realize the fragility of the white establishment.

I highly recommend Burn Down the American Plantation as it provides insight into how a revolutionary movement within the United States should be built. The book is also great insight for researching the direction the modern left is taking to become more viable for the needs of the 21st century. There is the recognition that Black Liberation is once again needed to aid in ushering in a new world based on fraternity, equality, and liberty for all people regardless of race or gender.