It’s the moment we’ve all been waiting for! On September 12, at the newly built Steve Jobs Theater, C.E.O of Apple Tim Cook announced the newest member of the iPhone series—the iPhone X.

Along with this addition, Apple has made a variety of new products available for pre-order, and they will be available in shops on September 22. These devices include the iPhone 8, iPhone 8 Plus, Apple TV 4K, and Apple Watch 3 with LTE connectivity.

The release of the iPhone X, the newest and most anticipated member of the clan, will mark the tenth anniversary of the iPhone since its debut in 2007. This product will be available for pre-order starting 12:01 a.m. PDT on October 27, and the release date is set for November 7.

The iPhone X features the biggest iPhone screen yet at 5.8-inches, stretching edge-to-edge with a high resolution Super Retina HD Display. The product comes in two colors, silver and “space gray.” The latest device will offer a new and improved 12Mp wide-angle camera with Portrait Mode for stunning selfies.

Another brilliant feature allows the consumer to use face recognition software known as Face ID to unlock the phone. In order to authenticate one’s identity, which ensures safety and privacy, this trait will precisely map the user’s face. This feature was added in lieu of the previous Touch ID authentication procedure, which was sacrificed alongside iPhone’s characteristic home button in order to make room for the larger screen.

The iPhone X will include Apple’s newest operating system, iOS 11, making everyday life more personalized and convenient for its users. Siri has been redesigned to translate what you say into different languages, such as German and Chinese. The Control Center has also been updated with more features in one spot, quicker access to other settings, and a more customizable design. The Maps app has also been redesigned to be smoother and quicker to navigate.

Additionally, the new software offers a quick-type keyboard for those multitaskers who have no time to spare. Holding something in one hand and your phone in the other? You can now select one-hand typing and the keys will move closer to your thumb. Among these changes, Apple’s new iPhones will only be available in 64GB and 256GB with both phones supportin 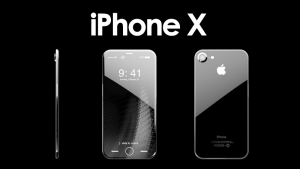 g wireless charging. The greatest news is that the iPhone X has the best battery life out of all the new phones, lasting up to two hours longer than the iPhone 8.

The iPhone X model price starts from $999, the iPhone 8 from $699, and the iPhone 8 Plus from $799.
Many consumers may not have it in their budget to allocate a nearly quadruple digit expense on a cellphone. However, the iPhone 8 offers similar features to the X. It has the same A11 Bionic chip that provides a faster CPU; it also has the same excellent camera with Portrait Lighting effects and True Tone, which adjusts to the screen appearance and color to be more comfortable for the users’ eyes, more readable in direct sunlight, and overall more accurate and natural.

Ultimately, it will be up to the consumer to weigh what factors matter the most to them when deciding what product to buy.