The television production industry has been slow going with representing non-normative identities on screen. Before the 90’s, it was rare to find an outwardly gay character, let alone one that was well fleshed out and a main part of the plot. Early 90’s sitcoms, such as “Friends,” used homosexual stereotypes to get laughs from the audience. For example, Chandler Bing was always made fun of on the show for “appearing” to be gay; this was a way of emasculating him in comparison to his male friends. Both Joey and Ross also have moments in the show when they are self-conscious about being straight and being perceived as masculine.

“Friends” is not the only show that used homosexuality as a recurring humorous element—it was the norm at this time. Even when gay characters were present, they tended to be known mainly as the “token gay” and their sexualities were usually over-exaggerated. The series premiere of “Will & Grace” on September 21, 1998 was a milestone within the television industry. Though gay characters did appear on the screens of households all over the country, they were usually supporting characters that were not featured in every episode. Will Truman, played by Eric McCormack, was one of the first to be a main character. His character’s name is even in the title of the show, suggesting it couldn’t exist without him.

“Will & Grace” has been criticized for its stereotypical portrayal of gay characters since its initial release. The premise revolves around Will and Grace’s sexualities, Grace being straight and Will being gay, as well as their gay friend, Jack McFarland. Their sexualities ends up being the most humorous aspect of the show, which could be extremely problematic. 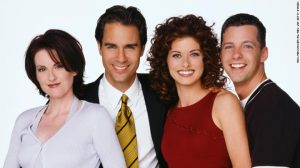 In 2017, it is a lot easier to encounter shows that portray characters who identify as a members of the LGBTQ community, though the primetime realm has not completely embraced such progressive concepts. A “Will & Grace” revival has been scheduled to air during the 2017-18 television season. Fans of the original show are expecting familiar situations that are true t
o the original show, but new viewers are probably expecting something a little fresher. They are hoping to see a less stereotypical representation of gay men, although it would be hard to completely change the way the characters are written in the revival.

Shows that exist primarily for the younger generations cater to this audience by including characters who are not straight. Lately, trans and gender non-conforming characters have been written into several shows geared toward teenagers. For example, the Freeform (formerly ABC Family) original show “The Fosters” discusses the experiences of being gay and transgender, among other relevant issues more readily accepted by today’s youth. The premise revolves around Lena and Steph, who are two married women with a family made up of adopted kids, all of whom have different identities and ethnicities. Other side characters are introduced throughout the seasons, adding to the conversations about gender identity and sexual orientation.

Having these types of conversations in teen dramas helps to normalize LGBTQ identities. It shows that they are more than their identities and they can live normal lives, besides facing oppression and the occasional added burdens. Since the release of “Will & Grace,” the representation of human sexuality in television has come a long way. The presence of television characters who do not conform to gender and sexuality standards is bound to become even more common in the next few years.