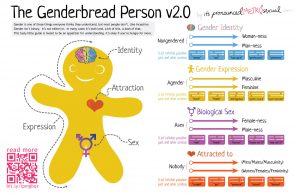 What makes someone transgender is still a mystery to most people, even to trans individuals. Without any clear cause, people have debated on the authenticity of the transgender experience, whether or not it is morally acceptable, and how people should confront this phenomenon. The definitions, nature, and flexibility of sex and gender have long been debated.

The term transgender refers to someone “whose internally felt sense of core gender identity does not correspond to their assigned sex at birth or in which they were raised.” this can encompass having no gender at all, and people that do not identify with multiple genders physically presenting themselves in a way that makes their desired gender recognizable, such as by dressing according to gender stereotypes or being post-operation.

People need to consider that everyone has a unique experience, especially according to their categorization as a minority, whether that be by race, culture, religion, gender identity, etc. Whether or not a group is oppressed is not something for an outsider to simply determine for the minority group. One could only attempt education about transgenderism by interacting with these people and since there are no easy answers, one would have to stay constantly informed about evolving theories and have a large variety of experiences to feel that they have even come close to the truth. Therefore, outsiders should accept that they cannot fully understand the trans experience, and should refrain from being so strongly opposed to it.

How can it be determined that a group is a victim of oppression? By the way that they are objectified. Philosopher Martha Nussbaum listed the seven properties of objectification, and trans people are subject to four: (1) Transgender people are denied their autonomy and right to self-determination, as seen by their difficulty to have sex-change operations, change their name, etc. (2) They experience inertness, or being viewed by others as incapable of making decisions for themselves and being unable to take action in their lives. The trans experience is often described as “gender dysphoria,” a medically classified disorder indicating a state of confusion or dysfunction. Their credibility is often seen as damaged, particularly under the stereotypes of “crazy” or “sinful.” They are even under speculation when trying to get permission for reassignment surgery though clearly the commitment to such as big decision speaks for itself.

(3) Transgender people also experience violability, meaning they do not have their boundaries respected by others. Many studies show that 50 percent of trans people will be subject to violence at some point in their life, according to Rape Response Service; and a trans person was murdered every 29 hours in 2015, according to Planet Transgender. Transgender people are fetishized, dehumanized, and the victim of hate crimes, showing that many people feel that they don’t have limitations in regards to a transgender person’s body. Frequently, a trans individual is asked about their “born” or “true” sex. They are asked to define their private parts to strangers as if everyone has a right to know.  Their privacy and body is frequently violated, showing how anatomy and related social behavior determine how a person is perceived. (4) Trans individuals face denial of subjectivity. Others don’t take into account the unique, authentic experience and feelings of a transgender person.

In many ways, the trans community is oppressed. Most people face difficulties due to the fact that biological and social constructs of the sexes are forcibly united. Neurobiologists at the University of England, Lesley Rogers and Gisela Kaplan, show a standard medical table with 17 sex categories, only two of which are considered “normal.” The human body has so many variations which, considering that said body was born that way, is actually natural. And yet, only a fraction of these forms are socially acceptable because reductionists overly simplify the human form. The word “normal” itself is a newer word and concept which rationalizes attacking or marginalizing the “abnormal.” Anne Fausto-Sterling, Professor of Biology and Gender Studies at Brown University, discusses the genital mutilation of infant hermaphrodites so that they would fit into the two-sex system. After this, they would be lied to about the natural form of their body and conditioned to fit their assigned sex. Most hermaphrodites identify with their taught, social sex, showing how gender is a learned behavior. Given these individuals, by nature, defy the two-sex system, it is clear that sex and gender are not as simple as people are led to believe. Sex includes, as far as we know, chromosomal sex, gonadal sex, hormonal sex, internal reproductive organs, external genitals, assigned sex, and one’s gender role. Gender roles are defined by social activities that are associated with masculinity and femininity, one’s identity, one’s status, one’s behaviors, and others’ perception of said person.

Transgender individuals may or may not be able to remedy inconsistencies in these interrelated factors because, as there are so many, it is easy to see how they may not all perfectly align. Many have argued, in opposition to the determinist theory, that this difficulty is natural because sex and gender are completely socially constructed. American philosopher and gender theorist, Judith Butler, has described gender as a belief, illusion, performance, and cultural/historical idea rather than a natural fact.

One could wonder, if there was no gender, could there be transgender people? Is their “confusion” or “defect” also a completely fabricated view? The trans community explores the entire spectrum between male and female. This pursuit benefits everyone in that their defiance of this oppressive social construct encourages everyone to assume whatever gender role they desire. Fausto-Sterling explains how most of those hermaphrodites which did not undergo surgery and remained physically ambiguous grew up psychologically healthy.

Actions, more than biology, define one’s identity. By using gender as a template and acting upon it, people can make social, political, and cultural statements which may inspire and create a new reality. Kate Bomstein, a transgender performance artist, wrote about what she learned from experimenting with her identity, saying, “I love the idea of being without an identity, it gives me a lot of room to play around … I’ve no idea what ‘a woman’ feels like … Being and belonging are closely related concepts when it comes to gender.”

Many argue that transgender people will regret getting sex reassignment surgery. However, regret among transgender patients and returning to their born sex is extremely rare. In fact, they would likely sooner commit suicide than conform to their assigned sex. The American Foundation for Suicide Prevention reports that 41 percent of trans people attempt suicide compared to 4.6 percent of people in the general population, according to USA Today. This desire is so strong that they follow through in the face of great condemnation.

This is all without having yet mentioned the obvious reasoning that people have the right to do whatever they want. Fausto-Sterling remarked that sex should be removed from documentation because, without sexism and sex-based judgement, there would be no purpose to define someone in this way. Sex is not as simple as everyone has long believed. People only understand things that they can see and feel, which is why cis people can only grasp sex in accordance to one’s physical body and expect a “matching” gender. However, gender is about one’s identity, not others’ forced ideas about what their identity should be.