This past December, Paris hosted a climate talk that leaders from all around the world attended in order to come up with a plan to slow the rise of global warming and attempt to lessen the human impact on climate change. It was during this multi-day December meeting that the Paris climate accord was created, which 175 nations signed this past Earth Day at the United Nations headquarters in New York.

The U.N. secretary, General Ban Ki-moon, was quoted by USA Today as having stated at the signing that, “We are in a race against time […] the era of consumption without consequences is over.”

The treaty had been debated for several years at U.N. climate negotiations before a consensus was made. Therefore, regardless of this being a non-binding treaty that nations signed on April 22, it is a huge step in the right direction in the fight against global warming.

The main goal of the agreement is to limit the temperature increase to “well below” 2 degrees Celsius by the year 2100. This goal has hopefully come just in time as multiple scientists have concluded that Earth warming by just two degrees Celsius would have disastrous effects on our planet. In order to reach this goal, every country that signed must set their own target in regards to how they plan to reduce their personal emissions.

The sheer amount of nations who signed this agreement on the first day shows the importance at which the world is putting the issue of climate change. In fact, last Friday’s signing set the world record for the highest number of countries who have ever signed an agreement on the first day it was made available. For environmentalists everywhere, this is a reassuring and positive sign that the world is beginning to understand the severity and urgency of climate change and global warming.

For the countries that did sign the accord, they have a lot of work to do before anyone can declare this agreement a success. Each world leader that signed has to now return to their home country’s governments and both ratify and approve the agreement. This is usually a lengthy process that could take months or even years. Once a minimum of 55 countries have completed this process, only then will the deal go into effect. Any countries who were not in New York for the signing get the next year to decide if they would like to partake in the agreement.

Both the U.S. and China are large nations that emit huge amounts of greenhouse gases each year. When these two nations’ emissions are combined, they alone make up almost 40 percent of the world’s global emissions. Luckily, both nations anticipate being able to formally commit to the climate agreement this year.

It is possible that these two countries’ participation in the treaty was imperative to many other nations signing. This is because some smaller nations, which don’t emit nearly as much greenhouse gases as the U.S. or China, wouldn’t feel that it’s fair for them to agree to reduce their emissions when the biggest polluters in the world aren’t making an effort to reduce theirs. Economics plays into this, because often times fossil fuels are cheaper to use than other types of energy.

The United Nations used Earth Day’s 46th anniversary for 175 nations to sign this historical climate treaty. It’s an ambitious agreement, and it proves that slowly but surely the world is rising up to combat the issue of climate change together. 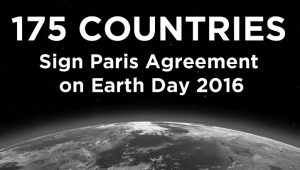