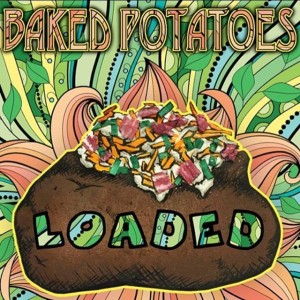 If you’re looking for the perfect album to add to your 4/20 playlist that’s dominated by bands like Sublime, Slightly Stoopid, Dirty Heads, and The Expendables, then Loaded by Baked Potatoes has you covered like gooey cheese and bacon bits.

The band hails from the quaint quasi-city of Oneonta, where they attended SUNY Oneonta for their undergrad degrees. Baked Potatoes built their sound by combining the spirit of college living with a relaxed day at the beach.

They could be classified as a reggae-rock band influenced by the ska, punk, and jam genres. The band performed at SUNY Oneonta’s Music Industry Club’s “Welcome Back Fest” to kick-off the Fall 2014 semester. They were memorable because they covered Blink-182’s “Dammit” and had their own theme song about being Baked Potatoes.

The spuds have swabbed the deck with the likes of Sammy Adams, H.R., The Sheds, The Fat Piece, and many other established acts. The sextet’s goal on stage is to put smiles on people’s faces as they play, which is 100 percent likely given the playfulness and dank delivery of their music.

Loaded is the band’s first full-length release, following two four-track EPs from 2015, Waiting For The Weekend and Welcome To The Bus. The flow of the songs that make up Loaded is like butter on a hot potato: each of the eight songs touch on different lyrical themes, but melodically run into one another very well. Each song is clearly the band’s representation of different genres, with some songs increasingly ska, some more reggae, and one a shorter punk track.

Let’s get into the bacon bits: Loaded opens up with a track called “The Builder” that plays on the children’s tale of the Three Little Pigs. A lot of call-and-response between different instrumental parts can be noted in this track, especially evoking a sense of good vibes as the lyrics tell the stories of various relationships.

The album proceeds with “Postcard Song,” which looks at love from the eyes of a heartbroken fellow, a contrast to the last track. Next up is “Blue Dream,” another track about love — but this time aimed towards a little lady named Mary Jane. There’s a transition from a more ska sound in track two to a reggae feel in track three, but track four, “No Shirt No Shoes,” marries aspects of both genres.

This tune sounds like a tropical vacation at first, but the song challenges the illegality of weed towards the middle and offers an unexpected drum solo.

We are then revived with a fast-paced ska-punk ditty with track five, “Unity.” This album stands out from the others not only in sound but in its lyrical content about standing together for an issue.

An abrupt return to ska-rock comes with “Home Wrecker,” a sound that continues until the album’s end. Track 7 is another song for heartbreak, titled “Don’t Close The Door,” but the album ends on a high note with “Satellite Beach.” Loaded’s happy ending is all about good times with friends and wraps up the album well.

Baked Potatoes’ sound is unrivaled because of their mixture of contrasting musical styles. The spuds provide fans with a taste of every topping, whether it’s gravy-covered reggae or sour cream punk. The taters have conquered the challenge of creating an album with each song being distinct and memorable in its own way, a feat that some riper potatoes can’t pull off.

Pat Tierney’s vocals are savory and unite well with the variety of instruments played by the band. Simply put, Loaded is the all-you-can-eat buffet for up and coming reggae rock.

Get Loaded with the Baked Potatoes on 4/20 and catch the band playing at The Westcott Theater in Syracuse with John Brown’s Body and The Hip Abduction the same day! 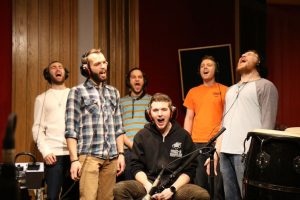