Winter Storm Ursula rocked the east coast on April 4, but that didn’t stop the Red Dragons from kicking off Division III Week at SUNY Oneonta. Per the NCAA, the governing body of collegiate sports, “Division III Week is a positive opportunity for all individuals associated with Division III to observe and celebrate the impact of athletics and of student-athletes on the campus and surrounding community.”

The student-athletes of SUNY Oneonta began the festivities with giveaways in the academic buildings. Originally, the giveaways were set to take place in the IRC Quad, but the massive amount of snowfall caused the giveaways to be relocated to Fitzelle, IRC, and Schumacher.

Senior track and field runner Jimmy Bernstein was one of the many athletes who volunteered to take part in the giveaways, which included a phone wallet, a Division III Week pamphlet, and a 20-percent off coupon good for any purchase at the Latte Lounge, located in downtown Oneonta.

The students were overjoyed to discover that the 20-percent off coupon was to one of the more popular eateries in town.

“It’s great to see all the support from the faculty, staff, and the student body. So this is our way of giving back to campus and hopefully people got joy from our giveaways alongside the actual giveaway,” said Bernstein.

The four-year senior has made significant strides since his first year at the school, improving both academically and athletically. The ideal ending for Bernstein would be to finish strong at the SUNYAC meet and qualify for the following ECAC and NCAA Championship meets.

“It’s great to be able to contend for a championship but it feels even better to be able to host one, especially in my senior year at Oneonta. We usually don’t have many home meets so it is going to be a lot of fun competing on our home track in my last season, especially when the stakes are so high,” said Bernstein. “Regarding the ECAC and NCAA Championship meets, we have a team of very talented individuals so I’m sure we will have a great showing at the [ECAC and] National Championship meets.”

Bernstein finished on the SUNYAC All-Conference Second Team in 2013 and qualified for the ECAC meet for the 3000m run in the 2014-15 season. Oneonta will be the site of the 2016 SUNYAC Outdoor Championship on May 6 and 7.

Bernstein is also one of the SUNY Oneonta athletes that helped contribute to over 4,000 hours of community service every year. This Division III Week is just another opportunity for the Red Dragons to give back to the community with their event CANstrution, taking place at the Southside Mall in Oneonta on Saturday, April 10. CANstruction is an event where teams build structures out of canned goods and are then judged in four categories. After the conclusion of the event, all the canned goods are then donated to the local food bank.

“We always compete in the CANstruction competition at the Southside Mall and it’s always a great time,” said Bernstein. “The community gives our athletic program such amazing support so it’s great when we can give back to them any moment we can.”

SUNY Oneonta concluded the kick-off of Division III Week with the NCAA Winter Sport Student Athlete Recognition at 5:00 p.m. in the Alumni Field House Skybox. This was followed by the Student Athlete Career Spotlight, hosted by three alumni who have achieved success in the criminal justice and psychology field. The three panelists consisted of graduates Lindsey Doxtader, Erika Puffer, and Chris Johnson.

Another Reason to Celebrate

The NCAA announced on April 4 that SUNY Oneonta is the winner of the Division III “It’s On Us” video contest. Former tennis star, Brynn Sussman, was the producer of the contest-winning video. The “It’s On Us” Campaign is an educational campaign that focuses on sexual assault awareness and prevention.

According to the NCAA’s website, the video was featured at the NCAA Division III Women’s Basketball Championship game at Bankers Life Fieldhouse in Indianapolis on April 4.

It’s an unbelievable honor for the Red Dragons to add to their treasure trove of accolades with this possibly meaning more than a championship trophy. According to the National Sexual Violence Resource Center, one in every four women are victims of sexual assault on college campuses with many more assaults going unreported. Oneonta’s student-athletes did their part to combat this issue and will continue to do their part to combat this heinous crime.

The video in its entirety can be viewed on SUNY Oneonta’s YouTube channel. For the rest of the scheduled events going on during Division III Week at SUNY Oneonta, you can follow Oneonta Athletics on Twitter (@RedDragonSports) and Instagram (RedDragonSports). 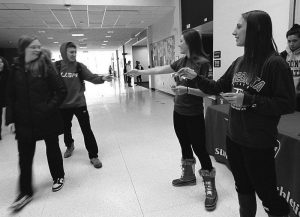