This past weekend in Brockport, SUNY Oneonta Women’s Track and Field made history by claiming their first ever SUNYAC Championship. Oneonta narrowly defeated Geneseo by just 4.5 points, 142.5 – 138, taking home five individual and one relay conference title. It was a thrilling contest that came down to the last competition of the day, the 4×400-meter relay.

Shine also claimed two individual titles in the mile and the 800 meters, setting meet records along the way with times of 4:58:52 and 2:13:50, respectively.

Donaldson won an individual title in the 60-meter hurdles and set a school record with a time of 9.18 seconds in her first SUNYAC Championship appearance.

After a well-deserved celebration, the women will begin preparing for the NCAA championship two weeks from now in Grinnell, Iowa. 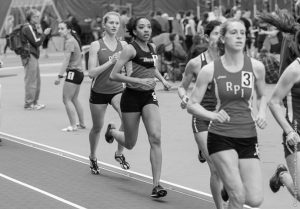