When you’re the best, everyone does whatever it takes to dethrone you. The Golden State Warriors have experienced that this season with even the cellar dwellers of the NBA playing like it’s Game 7 of the NBA Finals when Stephen Curry and company come to town. The five teams that have beaten the Warriors this season — the Bucks, Mavericks, Nuggets, Pistons and Trail Blazers — are a combined 138-155, and of those five, only the Mavericks and Trail Blazers are in the playoffs as of right now.

It doesn’t matter how these teams play against anyone else. When they play the Warriors, they play like their season is on the line.

Despite every team giving Golden State their best shot night in and night out, the Warriors are still 52-5 as of March 1 with their sights set on magic win number 73, which would give them the best regular season record in NBA history. Not only do they have to fend off the other 29 teams in the league, they also have to deal with constant speculation and “what-if” scenarios from fans, sports writers, and even former players.

By now, everyone has heard the “Who would win: These Warriors or the 95-96 Chicago Bulls?” argument. These questions are great for sports debate shows and conversations among fans, but they never really do either side justice because the teams played in different eras. The Bulls, led by Michael Jordan and Scottie Pippen, played in an era when opposing teams would put guys in the game whose only job was to make anyone who dared to score in the paint pay, whether it be an elbow to the head or just being knocked around. That’s how defense was played in those days.

If someone tried to do that in today’s game against one of the league’s best, such as Curry or Kevin Durant, they would be issued a flagrant foul and could be ejected from the game depending on the severity of the foul.

So while these questions are great for intense debates, they lack substance. That is until Stephen Jackson, a retired small forward/shooting guard who played 14 seasons in the NBA and won a championship in 2003 with the Spurs, said his 2006-2007 Warriors would beat the current team from Golden State. For those who don’t remember the 2006-2007 Warriors, they had a starting five of Baron Davis, Jason Richardson, Stephen Jackson, Al Harrington, and Andris Biedrins with notable bench players Monta Ellis, Matt Barnes, and Mickaël Piétrus. They had a record of 42-40, finished eighth in the conference, and made it to the semifinals, beating the number one seed Dallas Mavericks along the way.

That team definitely had talent, with sixth man Monta Ellis winning the Most Improved Player, but the 2015-2016 version of the Warriors would throttle Stephen Jackson’s squad. The “we had more heart” argument is great and all, but heart won’t stop the Splash Brothers from draining threes or Draymond Green from getting a triple-double. Not only is there more talent at basically every position for the 2015-2016 team, but they are also efficient statistically, something that the ’06-‘07 team can’t claim. The ’06-‘07 team was the second best scoring team and fourth best assisting team, but were outside of the top ten in rebounds, shooting percentage, three point percentage, and dead last in points allowed.

This year’s team is first in points, fourth in rebounds, first in assists, second in shooting percentage, and first in three-point percentage, though they rank in the bottom third of the league in points allowed. Stephen Jackson and company would get routed by this team, just like almost every other team that plays Golden State this year. They might not score more points than them, but they’ll always have more heart. 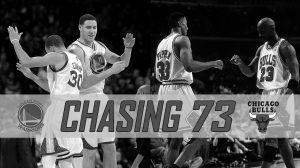