Next season the NFL will be without some of its biggest stars as retirements are running rampant across the league. Let’s take a look back at the spectacular careers of some of these NFL greats.

After 18 phenomenal seasons in the NFL, Charles Woodson has announced he is walking away from the game at age 39. The former Oakland Raider and Green Bay Packer will surely find his next home in Canton, Ohio as a member of the Pro Football Hall of Fame and will go down in NFL history as one of the best defensive backs to ever play the game. Over the years, Woodson has compiled quite the list of awards and accolades including nine Pro Bowl appearances, eight All-Pro teams, an NFL Defensive Player of the Year award, and a Super Bowl Championship.  Woodson was a dynamic playmaker on defense with 65 career interceptions (6th all-time) and 13 defensive touchdowns (tied for 1st all-time). Now with plenty of free time on his hands, Woodson can pursue his other passion of wine making under his signature label, “Twentyfour by Charles Woodson”.

As the NFL season came to a close, Detroit Lions wide receiver Calvin Johnson shocked the sports world by announcing his  plan to retire at age 30, after only nine seasons in the NFL. Nicknamed “Megatron”, Johnson was one of the most prolific wide receivers the league has ever seen. He was selected to six Pro Bowls, four All-Pro teams, and is the NFL single-season record holder for receiving yards with 1,964 in 2012. Megatron has already solidified himself as the best receiver in Lion’s history, holding the franchise records for receiving yards and touchdowns. Unfortunately for Detroit fans, all-time greats retiring in their prime has become an all too familiar sight, with legendary running back Barry Sanders also stepping away from the game at just 30 years old back in 1998. Johnson was the fastest receiver in NFL history to reach 10,000 yards, but with him leaving so much on the table, it will be interesting to see whether he one day finds himself enshrined amongst football’s finest in Canton, Ohio.

Defensive end Justin Tuck played all but one of his seasons with the New York Giants, and was a key contributor in both of their Super Bowl victories over the New England Patriots. Tuck’s best seasons came during the Giants’ two Super Bowl winning campaigns in 2008 and 2010.  The star pass rusher was elected to the Pro Bowl in both years and posted a career high in sacks with 12 during the 2008 season and a career high in tackles with 76 during the 2010 season. Tuck was a fierce competitor, performing best when the lights shined brightest. He is the only player in NFL history to have multiple sacks in multiple Super Bowls.

Nicknamed “Beast Mode” for his aggressive running style and ability to bulldoze defenders, the NFL says goodbye to Marshawn Lynch, one of its most entertaining players both on and off the field. Lynch has decided to hang up the cleats after an impressive nine-year career in which he totaled over 9,000 rushing yards and 70 rushing touchdowns. He was also a key contributor to the Seattle Seahawks Super Bowl-winning run in 2013, in which he accumulated 288 rushing yards and four rushing touchdowns in three postseason games. Also known for his reluctance to talk to the media (I’m just writing this so I don’t get fined) and his immense love for Skittles, Lynch is a player and a personality that will be sorely missed. 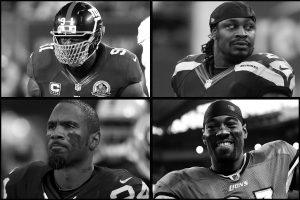