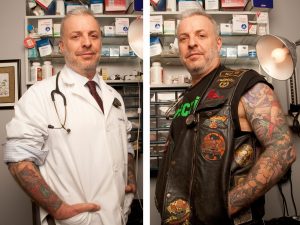 Tattoos and piercings aren’t new‑ they’ve been around for thousands of years, with varied meanings across cultures. They’ve been a sign of respect and identification for one’s own social circles, from warriors to pirates to bikers to sports teams. They’re symbols of life experiences, and the process of choosing and getting a tattoo is ultimately meant to be a positive and meaningful experience.

However, many people both young and old do not subscribe to this belief. Whether for moral or professional reasons, there is still a large number of people in the world who hold a negative view of tattoos. Those views may have different levels of depth as well; for instance, an employer at a law firm might dislike tattoos because they want their employees to look respectable and well dressed. But where exactly does this thought of wanting to hide tattoos come from?

For the Western world in the 20th century, the people who were most likely to get tattoos were sailors, soldiers, and bikers. Individuals in these groups would get numerous tattoos that would signify that they were part of a specific cultural collective. This may be one reason why people seem to dislike tattoos. For them, they believe that tattoos are only meant for men who are too rough around the edges to be a completely integrated member of society.

According to a poll conducted in 2012 by The Harris Poll, at least one out of every five adults has a tattoo. Among people aged 18 to 29, it is likely that upwards of 40 percent of them now have a tattoo. Reasons for getting tattoos have greatly increased in the last few decades, and they aren’t just meant for tough guys anymore. Video games, movie characters, art, and portrait tattoos are just a few of the types of tattoos that a lot of young people get nowadays. In the 21st century, people get tattoos for fun, or to commemorate special moments in their lives. Yet many people, particularly older employers, still look down on tattoos and the people that have them.

Can this be considered discrimination? Tattoos are something that people consciously choose to get, but tattoos aren’t likely to have any actual impact on a person’s job performance or skill set.  In fact, they have no impact at all on these things. When an employer assumes something negative about a person simply because of their own preconceived notions about tattoos, they are indeed discriminating.

If you were having a heart attack and were rushed to the emergency room of a hospital, would you stop and ask if the doctor who was saving your life had tattoos or not? You’re more likely to care if that doctor effectively does their job. If the stigma surrounding tattoos could be dropped, then people would be judged on individual merit instead of the styles on their skin. Tattoos no longer need to be “job killers,” and people shouldn’t have to be afraid of others’ opinions on their own choices.