In the world of baseball, some fans are incredibly superstitious and may take things a bit too seriously. So much so that the thought of curses on particular teams have surfaced because of certain events that have happened to these teams.

One of the most famous curses that fans have come up with is the Curse of the Bambino, which was placed on the Boston Red Sox back in 1918. It is believed that because the Red Sox traded Babe Ruth over to the New York Yankees at this time, they would never win another World Series. When Ruth was on their team, the Boston Red Sox had won four series in the prior seven years. It looked as though they would never win another World Series after this infamous trade. It wasn’t until 2004, 86 years after the inception of the curse, that it was broken when the Red Sox swept the St. Louis Cardinals in the World Series after making history as the only team to win the American League Championship Series after a 3-0 deficit. Needless to say, Boston fans were thrilled as the historic curse was broken in historic fashion.

The Curse of the Billy Goat is another famous baseball-related belief. In 1945, a man was kicked out of Wrigley Field during a World Series game where the Chicago Cubs were playing the Detroit Tigers. The man was booted from the game because his pet goat which he had brought with him smelled, and other patrons were complaining about it. As this curse goes, it was famously said by the man, “Them Cubs, they ain’t gonna win no more.” And since this loss in the 1945 World Series game, the Chicago Cubs have yet to make it back to the World Series, and have not won a World Series since 1908. This particular curse was almost broken this season as the Chicago Cubs made a strong playoff run but were defeated by the New York Mets in the National League Championship Series.

Curses in baseball are a thing of legend; as time goes by they become a part of the game’s history. Whether they are broken or not, curses bring excitement and anticipation not only to fans of the team’s they affect, but to all the fans of the game. 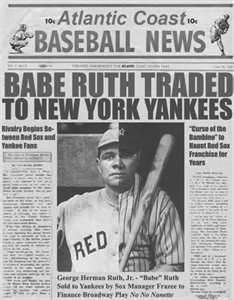 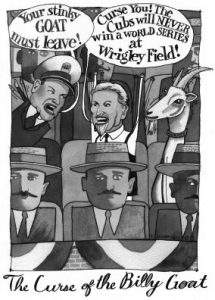