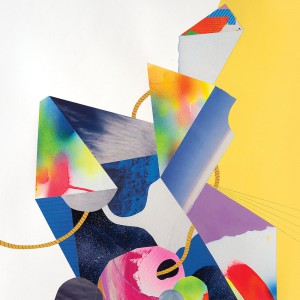 Perhaps critics took Reptar, the Athens, GA quartet named after the toy dinosaur from a 90s Nickelodeon T.V. show, a little too seriously upon the release of their debut, 2012’s Body Faucet. Granted, the album was a bit spotty, overlong and mostly a rehash of indie staples, but the newcomers were plagued with little studio experience and a disinterested label – not to mention given only a month to record and mix.

While it’s unclear whether a mightier first statement was farther up their sleeves, the inescapable highlights, with track names such as “Orifice Origami” and “Houseboat Babies,” suggested that Reptar were there for the very same reason as their college audience.

Fit for mix tapes and festivals, it’s not a stretch to enjoy the quartet’s music, a blast of bright eccentricity, major keys and eternal summer; but when they’re compared to the likes of MGMT, Passion Pit and Yeasayer, it’s hard to compete.

Yet with the release of followup Lurid Glow, Reptar suddenly seem very suitable to do just that.

“Had a maturation,” vocalist/guitarist Graham Ulicny sings in the opening line, and what’s immediately apparent is the firm confidence of a group – which also includes William Kennedy, keyboards; Andrew McFarland, drums; and Ryan Engelberger, bass – who’s taken time to make a record it’s proud of.

Recorded between day jobs, in Athens, over a period of two years, Lurid Glow is a polished set of sleek, fully constructed tunes that range from Roxy Music bombast (“Ice Black Sand”), neo-psychedelics (“Breezy”) and glistening electronica (“Particle Board”). Although with Ulicny’s erratic vocals and their world rhythms the band can’t shake the Vampire Weekend comparisons (“Easier to Die” would fit snugly on Contra), Reptar seem more comfortable as the artsy party animals to Ezra Koenig’s band of Ivy Leaguers.

Producer Andy LeMaster (Bright Eyes, Michael Stipe) expands upon Body Faucet’s intoxicating energy by refining the five plus minute sprawls down to briefer, more effective jolts of under four. This makes tracks like “Cable,” a thunderous stunner of horns, driving guitar and growls, stay just as catchy upon repeated listens without tiring out.

When Reptar do indulge in longer cuts it’s less about keeping the same thing going and more about exploring something new. “Particle Board” begins as a jittery study on loneliness before succumbing to an expansive elastic groove.

What makes Lurid Glow such a surprisingly compelling listen however, is what sets it apart the most from its predecessor. Hidden in the middle are the two most moving songs Reptar have ever written, both revealing a vulnerability only hinted at by Body Faucet’s “Ghost Bike” and lovely closer “Water Runs.”

The spare marimbas that open “Amanda” are a sudden and welcomed change of pace, but when Ulicny repeats the simple chorus of “Do you love me?,” his lived-in yearning is palpable. Once the horns emerge for a gentle climax, there’s no way around Lurid Glow getting under your skin.

“Every Chance I Get” only solidifies this attachment. With its ache for midnight passion (“Language disappears/The nape of your neck”) and a shimmering guitar that recalls the Cranberries’ “Linger,” it’s the type of song that can make you smile and cry at the same time. Ulicny’s delivery, unruly and bare, has never been more impassioned, the band’s sound never closer to a surefire hit.

These two tracks offer irresistible tones of the bright sonic color from which the album gets its name. As a whole, Lurid Glow radiates a liveliness and immediacy that show Reptar have improved upon Body Faucet’s indie-by-numbers template by painting out of the lines.

Key Tracks: “Every Chance I Get,” “Amanda,” “No One Will Ever Love You”