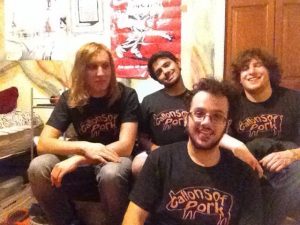 Whether or not you’ve seen them, you’ve undoubtedly heard of Gallons of Pork, the funky, chaotic four-piece rock band made up of alumni, Joe Kaplan, senior, Frank Cicciarello, and juniors Mike Sanbeg and Mohammad Sadique. The band held its album release show, hosted by The Hub Collective on Spring Street on April 17 in Oneonta. A year in the making, the release of the album, (in)appropriately titled Meat The Band, seems to be the climax of the band’s journey.
Opening for Gallons of Pork was Naughty, another well-known Oneonta rock band made up of sophomores Patrick Snyder, Justin Babbino, Lucas Benedict and freshman Andrew Loffler. The band played for a packed room, setting the mood for the night with groovy, driving rock songs. Every member of the band sang at one point, which showcased the band’s diversity among its vocal and musical styles. They covered the popular “Reptilia” by The Strokes, a song that fit in well with Naughty’s own catchy-yet-substantial rock style.
After Naughty finished their set, Gallons of Pork began to play for the room. The band performed many songs both on and off their new album, including the family friendly classics like “Pull My Pork” and “Weed Police.” The song titles mostly speak for themselves; Gallons of Pork doesn’t take themselves all that seriously. While some people may find this to be a bit cliche after a few songs, there’s often some clever wordplay within the lyrics.
The music is rather diverse, with many of the songs containing funky riffs, wah and phaser-drenched leads and slam-like downtempo breakdowns. The way the band sets up their more freestyle sections is intelligent, as it tricks the listener into thinking that they are improvising on the spot. However, it’s evident that the band clearly practices every section numerous times to make it sound exactly the way that it does.
The guitar solos range from 70s funk rock, to pentatonic shred runs, to outright noise. One gripe I have about the solos is that the speedy runs played as fast as possible sometimes overstay their welcome. They don’t always fit the mood of the music and don’t give the listener any room to breathe. While Gallons of Pork’s style is meant to be chaotic and relentless, I think that utilizing a minute-long shred solo would be more impactful and unique if it wasn’t done in nearly every song. However, this is my only complaint, and sometimes a minute or so of shredding overtop a breakdown is just what is needed to bring the energy to the next level.
Overall, Gallons of Pork’s album release show can be seen as the apex of their career. The show went off without a hitch, and from the turnout it’s very clear that the band is well liked and known by many in Oneonta. The show was a torrent of innuendo-laden cacophony, which I think sums up what Gallons of Pork has always been going for.