It is still early in the 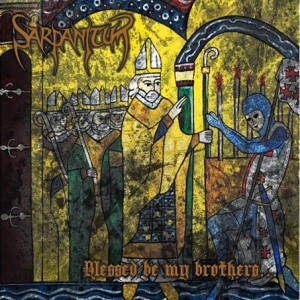 year for musical releases but it is safe to assume that Sarpanitum’s second full length offering, Blessed Be My Brothers, will be one of the most pummeling, blistering, triumphant and brutal releases of 2015. Everything that makes modern death metal great: inhumanly fast blast beats, fretboard-burning technical riffs, triumphant melodic leads and atmosphere, are all turned up to 11. Sarpanitum’s lyrics deal with ancient history, specifically the middle ages and crusades. The stunning album art looks like it came from the era of Charlemagne. The lyrics deal with Christianity’s rise to prominence and how that has been damaging to mankind. With song titles like “I Defy For I Am Free,” it is clear that Sarpanitum preach empowerment of the self.
What makes Blessed Be My Brothers such a pleasurable listen is the fact that every track has its own distinct character. The album features three melodic instrumental tracks peppered into the brutality, the first of which is the opening track, “Komenos.” This track sets the mood for the rest of the album as it features a mid-paced groove with some guitar shredding over it until the music erupts into track two, “By Virtuous Reclamation.” The second track bursts right out of the gate with one of the most infectious and triumphant guitar lines I’ve ever heard. Subtle keyboards enhance the atmosphere in a way that isn’t common in death metal.
The sound is similar to that of the cosmic death metal’ stylings of the fellow UK band Mithras, of which drummer/guitarist Leon Macey lends his drum skills to this album. The drumming is of the fastest and most war-like variety. Blast beat speeds that would seem impossible to some are executed with ease and finesse. Mithras live guitarist Tom Hyde also plays guitar in Sarpanitum.
On first listen, especially to the unseasoned listener, it might be hard to wrap one’s mind around the endless blasting. The shifting melodies, motifs and rhythms give each song on the record a unique character. The other two instrumentals “Immortalized As Golden Spires” and “Homeland,” allow Sarpanitum to illustrate the world that inspired them. They use the keyboards to create ambiance masterfully–while giving the heavier songs more context and make the album a more unified experience.
What makes Blessed Be My Brothers so great is that it is so extreme in many different directions. It has that Morbid Angel or Behemoth brand of in-your-face brutality with some Gorguts weirdness, but it has a spiritually elevating mood that harkens back to Lykathea Aflame. The vocals are an Immolation kind of low. This record is loaded. Rather than reach for subtlety, Sarpanitum decided to appease their fans after four years between releases, and load this thing with as many hooks as possible. Blessed Be My Brothers proves to be extremely rewarding more so with each listen. The layers begin to peel back and you can further immerse yourself into the ancient and cosmic world Sarpanitum recreate.
Rating: 9/10