The New York Rangers ended their  2014 playoff run with a heartbreaking loss to the Los Angeles Kings in Game Five of the Stanley Cup Finals. After Kings defenseman Alec Martinez put the puck past Rangers goalie Henrik Lundqvist in double overtime, Ranger fans were understandably distraught, but knew that good times were still ahead. Even though they lost forward Brian Boyle and defenseman Anton Stralman to the Tampa Bay Lightning via free agency, two key factors to their previous playoff run, there was still a solid core intact.

But the early parts of the regular season were far from spectacular. They started the season with a mediocre  record of 11-10-4, treading towards the bottom end of the Metropolitan Division.

Head Coach Alain Vigneault had to do some line juggling as defensemen, recently named captain Ryan McDonagh, Kevin Klein and Dan Boyle all missed significant time due to various injuries. On offense, their top line center, Derek Stepan, broke his leg during training camp, forcing him to miss more than a month of play. There was poor defensive play due to the lack of team chemistry often leaving goalie Henrik Lundqvist out to dry.

Since the Rangers slow start, they have been one of, if not the best team in the NHL, compiling a record of 49-11-3. They have recently been awarded the Presidents’ Trophy. This means that for as long as the Rangers are in the playoffs they will have home ice advantage, a key factor if a series goes to a decisive Game 7.

Why have they been so good? One of the major reasons has been the play of  Rick Nash. Nash, who seemed invisible in the 2014 playoffs, only scoring one goal, has exploded during this year’s campaign, scoring a career high 43 goals. Along with Nash, the most important player has been backup goalie Cam Talbot, who became the temporary starter after Lundqvist took a puck to the throat, straining a blood vessel. This season Talbot has compiled a record of 21-9-4, with a 2.21 goals-against average (GAA) and a .926 save percentage. Lundqvist has since returned from his injury and reclaimed the starting role.

Oneonta senior and Rangers fan Dan Romanczyk has loved the play of these two, “Other than number 61 (Nash) setting a career high in goals, Nash has been noticeable in all three zones…There isn’t enough to be said about Talbot’s play over the course of time he was in the spotlight. He propelled the team into first place and brought a cool and calm demeanor to the team,” Romanczyk said.

On the final day before the trade deadline, General Manager Glen Sather made a blockbuster trade, acquiring defenseman Keith Yandle from the Arizona Coyotes for prospect Anthony Duclair, defenseman John Moore and a first round pick. Yandle is one of the best passers in the league and was brought in to help fix a struggling power play.

The Rangers are headed to the playoffs once again and will face the Pittsburgh Penguins with hopes of finishing off what they couldn’t last year, bringing the Stanley Cup back to Madison Square Garden. Game 1 is on Thursday. 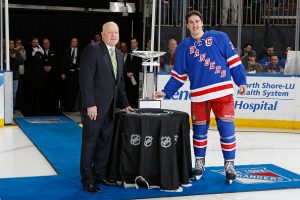