In the era of the one-and-done college basketball player, it’s only fitting that Head Coach Mike Krzyzewski and a freshmen-led team guided the Duke Blue Devils to their fifth National Championship by defeating the Wisconsin Badgers 68-63. All four players who scored double-digits were freshmen, scoring 60 out of 68 points.

The country might not have seen a lot of Jahlil Okafor in the title game due to foul trouble but they were able to see plenty of Justise Winslow. On Chad Ford’s Big Board per ESPN, Okafor is the top-rated NBA prospect; Winslow is ranked sixth.

Wisconsin featured two NBA prospects of their own, Frank Kaminsky and Sam Dekker. Kaminsky was recently crowned the 2015 National Player of the Year. Both of them played exceptionally well in the NCAA Tournament, boosting their draft stock in the process. Kaminsky and Dekker are ranked 13 and 16 on Ford’s Big Board, respectively.

So what makes these players ready for the NBA?

Strengths: Okafor has the ability to dominate in the post, as his proficiency with his back to the basket was the primary focus for many games. Combined with his ability to take the ball off the dribble, Okafor is truly a dominant player in the paint. Shot blocking is an underrated part of his game as well, averaging 1.4 blocks per game but Okafor has the lowest block percentage among centers drafted in the top ten in the past ten years, per Pete Thammel of Sports Illustrated.

Weakness: Okafor isn’t the most polished defensive player, and has a slight propensity to fall into foul trouble. There’s been times where Okafor has looked lost on defense and cannot rely on athleticism to make up for his transgressions. His low block percentage can be attributed to his lack of vertical jump. In addition, his free throws must improve (52 percent).

Strengths: Winslow has an NBA-ready physique, measuring at 6’7” and 225 lbs. An excellent defender (averaged 1.3 steals and 0.9 blocks), Winslow uses his long wingspan (6’10”) to cause havoc on defense. Throughout the season Winslow continued to prove that he could score, posting double-digit points 19 times in the second-half of the season.

Weakness: Winslow needs to become a more consistent scorer. It looks like he relies on his athleticism too much at times, making him more susceptible to fouls (averaged 3.8 fouls per game). Winslow’s free throws could also improve (64.1 percent).

Strengths: An inside-outside big man that can shoot efficiently from three (41.6 percent), albeit from college range, Kaminsky also has an excellent midrange game. He’s very crafty off the dribble, making  his jump shot even deadlier. He is very efficient on the offensive end of the floor but is an average defender. His measurables are favorable as he is seven-feet tall, although his weight could be higher. In addition, he is very proficient in the post with excellent footwork.

Weakness: Weight is a concern regarding his position. How will he handle the bigger, stronger players in the NBA? He can easily become a defensive liability. There are concerns with his athleticism as well as experts wonder if Kaminsky can be crafty enough to get by quicker big men.

Strengths: Dekker is an efficient scorer as he shot 52.5 percent from the field this past season and 33.1 percent from three-point range. He is very athletic which can assist his defensive miscues. He is a high-energy player that can make plays with his hustle and he can play either the three of the four.

Weakness: Dekker is not the best defender (0.5 steals and 0.5 blocks per game) and  his man-to-man defense is shaky.  He can create his own shot at times but relies on it too much. How will he fare against other players at his position? At 230 lbs, it will be hard to guard bigger forwards. 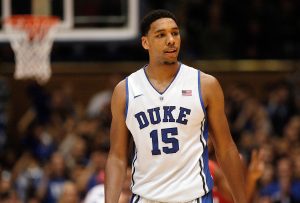